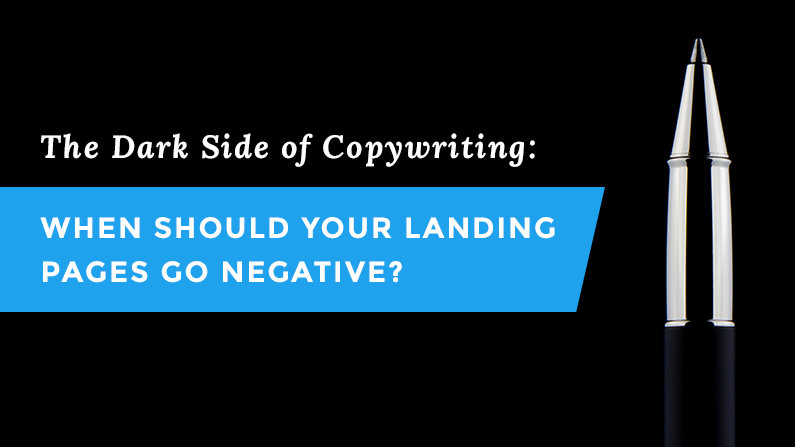 As the much-anticipated seventh Star Wars movie, The Force Awakens, concludes its opening weekend, I’ve been thinking about the temptations of the dark side.

Of copywriting, that is.

Like The Force itself, the ability to write compelling landing-page copy is a power that can be used for good or for evil.

Even assuming that you don’t have evil intentions (which we hope is true—the Darth Vader of copywriting would definitely be violating our terms of service, to say the least), your copy can still take two different routes: one as bright as noon on Tatooine, the other lined with shadows.

The first style of copywriting—let’s call it “light-side copywriting”—appeals to readers’ higher selves. It lays out rational intellectual arguments. Or it aims to inspire readers with hints of what’s possible, whether it’s a better personal life or a better world. It can play strongly on the emotions, but those emotions are positive, such as:

Dark-side copywriting appeals to what some call the “lizard brain,” the part of the human psyche that’s as territorial and reactive as the stereotypical reptile.

The lizard brain doesn’t assess things rationally before acting. It responds predictably to changes in its surroundings, and it spends most of its energy trying to defend its dark little burrow from threats. To make the lizard do your bidding, you’ll play on emotions like:

Almost any message you have to convey can take either pathway. Consider these pairs:

You may have strong instinctive preferences in either direction. Some urge: have a little faith in your audience, and you’ll be rewarded.

Others counter: in a never-ending onslaught of content, your writing has to go for the jugular to get any attention at all.

But what does the data say?

That’s what I’m going to explore here—and fortunately, the massive number of articles published online have formed bodies of data that have allowed many researchers to dig into this very topic. I’ve discovered several studies that shed a little light (or darkness, as the case may be) on where your copy should make its alliances.

Hint: it turns out it’s complicated, and there’s probably room for both approaches in different situations. To get your copywriting gears turning to make your most visible copy—your headline—more emotionally powerful in either direction.

1 point for the dark side: good news for the “worst” headlines

In 2013, Content-marketing network Outbrain studied 65,000 page headlines and sorted them into 3 categories:

The takeaway: if you’re trying to pique visitors’ curiosity with strong claims, consider whether there’s a way to flip the good news you have to share. The darker side may be more tempting to visitors.

And if you do decide to stay positive, you might want to shy away from proclaiming that what you have to offer is the “best” or “easiest” solution. Visitors on an ad-saturated web may greet these claims with skepticism. Instead of writing about how terrific your product is directly, try focusing on how what you have to offer will benefit your audience’s lives.

1 point for the dark side: scarily engaging content does this

Also in 2013, Iris Shoor of tech company Takipi analyzed the most-shared posts on 100 top tech sites (such as TechCrunch, VentureBeat, and ArsTechnica).

At the top of the list? Headlines that relied on dark vocabulary: kill, fear, dark, destructive, bleeding, war. The least-shared posts—even when they were covering the exact same news developments—used softer or more neutral turns of phrase.

Language that was less grim but still negative also rose to the top. Iris found a correlation between number of shares and use of the words no, without, and stop.

By contrast, the bottom of the heap was littered with warm, fuzzy vocabulary: wins, celebrates, grows.

If you’re aiming to spread your message by getting visitors to share your content—especially to a techy crowd—it may pay to look on the dark side of life.

1 point for the dark side: to influence others, just say no

Not all research on negative communication comes from the world of online headlines. A 2009 study in Social Influence examined communications in the health field: specifically, whether experts would be more influential by promoting good health practices or by deterring bad ones.

Translation: if you want to get someone to take action, try telling them how it’ll help them avoid something bad, rather than do something good.

2 points for the light side, 1 point for the dark side: viral content can go either way

In 2012’s “What Makes Content Go Viral?”, Jonah Berger and Katherine L. Milkman studied every article the New York Times published for 3 months in an attempt to discover why some articles spread like wildfire while others just sit there.

Their conclusions point to a both a mixed view of the dark-side/light-side dichotomy and a deeper explanation of why negative copywriting can be so effective:

“Positive content is more viral than negative content, but the relationship between emotion and social transmission is more complex than valence alone. Virality is partially driven by physiological arousal. Content that evokes high-arousal positive (awe) or negative (anger or anxiety) emotions is more viral. Content that evokes low-arousal, or deactivating, emotions (e.g., sadness) is less viral. These results hold even when the authors control for how surprising, interesting, or practically useful content is (all of which are positively linked to virality), as well as external drivers of attention (e.g., how prominently content was featured).”

That is, the emotional impact of web content isn’t all in your head—it’s in the body, too, and it’s largely the body’s response that will determine whether you’re moved to share any given piece.

This study might suggest that the previous dark-side-friendly reports were missing something: perhaps it’s not that negativity is more effective, but that it’s easier to get readers worked up by negative themes than positive ones. Find the right positive language, and you may do even better.

So, if you hope to go viral, consider the intensity of the emotion your copy conveys. Setting a mood of tranquility, satisfaction, or relaxation isn’t likely to get landing page visitors to share. But if you can make them feel excited, surprised, inspired, or delighted, you may have a hit on your hands.

-1 point for the dark side: don’t stand under a negative headline

Writing last year for the New Yorker, Maria Konnikova examined several studies that assessed how headlines affected readers’ perceptions of everything that followed. Unsurprisingly, she concluded that they can seriously sway how visitors interpret everything else on the page, from facts to photos.

Of particular interest: if you do use a negative headline, you should be careful what you place under it. In one study from neuroscientist Ullrich Ecker, a new headline that focused on, say, a murderer caused readers to rate the person in the photo beneath it more harshly—even if that photo was actually of the murderer’s victim. (And even if that fact was totally clear in the caption and the body copy.)

Strong example? Yes, but the same issue can arise on your landing pages. Consider a page like this:

Just by virtue of appearing next to the negative headline, Dr. Jones himself is likely to be subconsciously viewed as one of the “deceitful” dentists the headline warns against.

Negative copy can taint other elements around it—so use this power wisely.

1 point for each side: achieving amazing post-click engagement

Finally, there’s an interesting little bit of light in a report from HubSpot and Outbrain, which analyzed a remarkable 3.3 million headlines on Outbrain’s network. In line with Outbrain’s research on superlatives, the word “amazing” in a headline dragged down click-through rates.

But that was only half the story:

Despite the finding that featuring the word ‘amazing’ in headlines can deter readers from clicking through, we see much higher post-click engagement levels among the few who do click through. While ‘amazing’ may only attract a small audience, this is an audience that continues to be highly engaged.”

And there’s the rub: it all depends on who you really want on your page. Your landing page copy doesn’t have to attract the whole world to succeed—it only has to attract the people who are truly receptive to what you have to offer. That audience might be small, but if you can find out what clicks with them, you don’t need to worry about the rest.

Have you ever experimented with running positive vs. negative copy on your landing pages? What did you discover? Tell us in the comments.