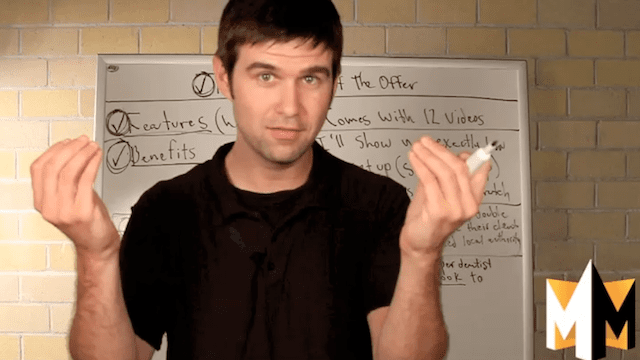 So back in the day, people sold features. So let me just give you an example. We’re going to use a consistent example here. A feature of a product might be that it comes with 12 videos, let’s say you sell an online course and it comes with 12 videos. So a feature might be that you have 12 videos. The benefit of these videos might be that you show someone; let’s say they’re your videos, that you show someone step by step how to set up a WordPress blogging platform or system for their business.

And what’s beautiful about the videos is that they are screen captures and you show people step by step exactly what to do, nothing is left to the imagination and they can see it happen. That’s the beauty of having these videos. So the feature is that there are 12 videos. The benefit is that after you watch them, you’re going to see exactly how to set up this blogging system for your business step by step.

Okay, so we’ve evolved from features to benefits to outcomes. Well, let me just explain that. Let’s say these 12 videos that show “someone” actually show a business owner how to set up a blog and blogging system for their business and further that they’re specifically created to show a cosmetic dentist how to start blogging and become local respected authority on cosmetic dentistry in their local market, to become the trusted authority on cosmetic dentistry in their neighborhood to build trust and to blow everyone out of the water. So the outcome of setting up this blogging system might be that cosmetic dentists on average double the number of clients they have as a result of becoming the trusted authority, using their blog to rank high on Google; all this stuff.

So the feature is that there are 12 videos in the course. The benefit of watching those is that you get step-by-step instructions; you get to see how to do it with your very own eyes. The outcome would be that you could double your business or double your client base.

So people have been preaching outcomes here for, I don’t know, a couple of years now, two or three years. What we’re seeing now is that the best thing to sell is really a transformation. And let me tell you about the difference between an outcome and a transformation. An outcome is selling a very specific end point as a result of the training you’re selling, for example. You are selling an externally verifiable outcome when you’re selling outcomes. And what I mean by externally verifiable is that other people can verify that you achieved this outcome.

A transformation also describes the beginning point; you know where they’re starting. And if you create marketing that is incredibly aware of where people are starting out and where they end, conversions will be much higher than if you just describe where people end up. Someone might have a course telling me that I’m going to make a billion dollars; but if I don’t believe that it’s created for someone who’s starting out at my particular point, then I’m not going to believe that they can take me to where they say I’m going. And a lot of people believe that when they are this specific in their marketing that they lose customers, but they actually gain so many more.

So we’re evolving from features to benefits to outcomes, where you just specify the endpoint in your marketing, to transformations where you specify where they are to where they end up. For example, if you weigh 300 pounds, this is a product that will get you down to 200. For example, if your business is currently bringing in 2,000 a month, we can help you bring you 2,500; that’s a transformation. If you just say you can help someone to get to 5,000, that’s selling an outcome. If you tell them that you can bring them from 2 to 5, that’s a transformation.

Anyway, I hope this has been useful. I hope you seriously consider implementing transformations in your life. I wish you all the best. Thank you for being here and I’ll talk to you next week. My name is Clay Collins and you are watching The Marketing Show. Take care.