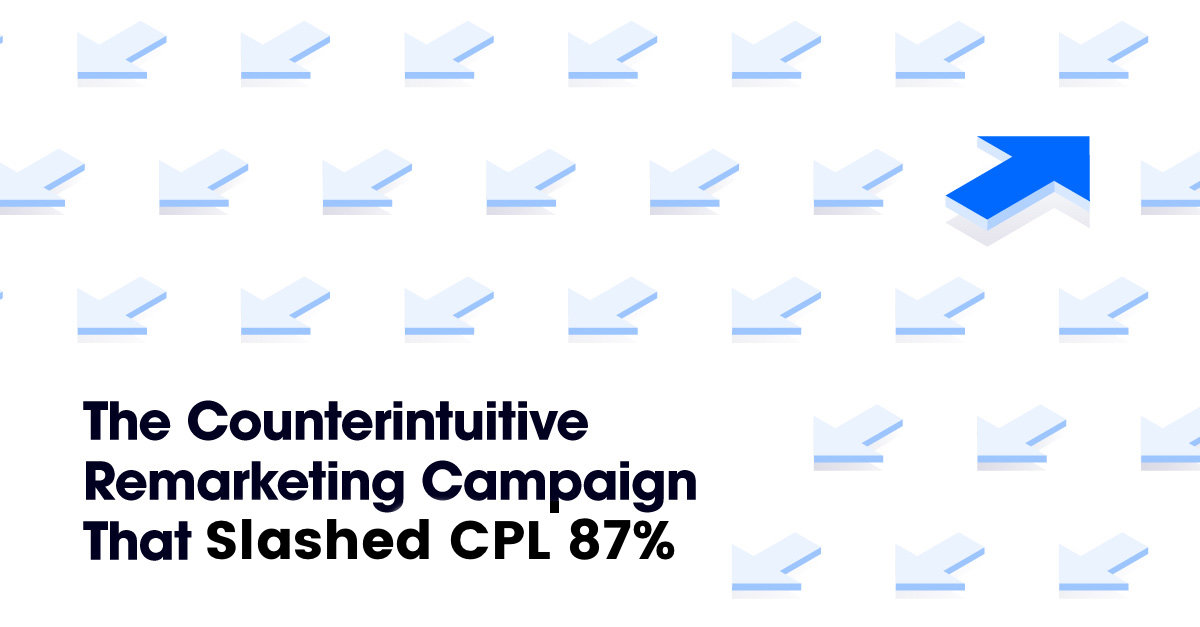 Most remarketing ads are pretty simple.

You saw this thing. You didn’t buy it. Here it is again. Want to buy it now?

And they’re pretty effective—certainly better than cold traffic, at any rate.

But of course, no conversion-minded marketer can leave it at “pretty effective.” So in the runup to Black Friday 2016, the Leadpages team decided to shake things up by pairing a Facebook remarketing campaign with two other tactics that had worked well for us … on their own. There was really no telling how they’d work all together.Those tactics?

And a huge one-time promotion.

Over the past decade, Black Friday/Cyber Monday has expanded from the big-box stores to become a major promotional event for all sorts of businesses. And when people are in the mood to look for deals, why not give them one?

Typically, we’d go ahead and include our Facebook remarketing audiences in any large promotion, including this one. But this time, we gave them something special: an opt-in opportunity.

That opportunity: get notified when the promotion goes live.

Here’s the landing page we drove traffic to: 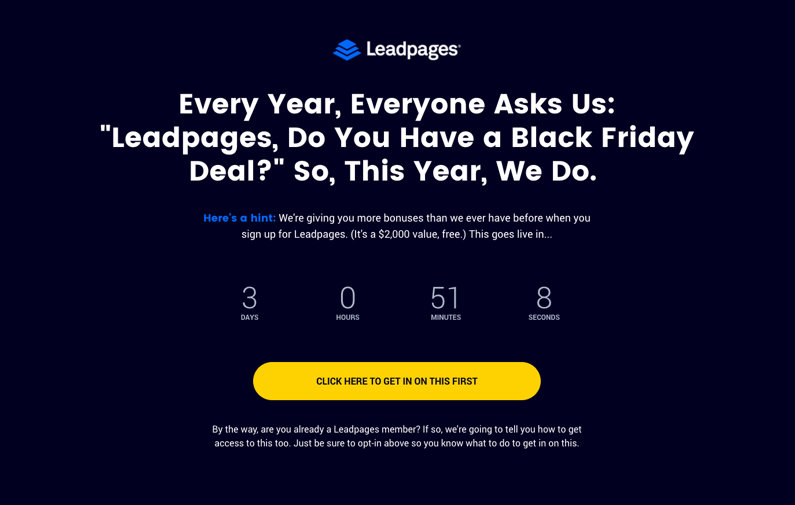 I’m going to admit something here: I was just a little skeptical when I heard about this strategy.

I knew that building an early-interest list worked. I knew about the massive power of presells, and the “interactive offer.”

But could it work on this small a scale?

From this single landing page—sent to our remarketing audiences on Facebook over the course of a few days—we netted between 900 and 1,000 leads. These were people who directly indicated that they actively wanted to receive a pitch for our products.

Usually, those kinds of incredibly qualified leads trickle in a few at a time. This was a flood.

But the true test came once the promotion launched when we emailed our offer to those new leads, as we’d promised. Were they really that warm?

In a word, yep. More than 100 of them purchased right away, increasing our average remarketing lead-to-sale conversion rate from 7.7% to 10.7%—a 39% improvement.

The raw results are impressive, but the true power of this technique comes into focus when you look at the ROI. Our cost per lead for this campaign came in under $2, up to an 87% reduction in average CPL, depending on the channel.

That means that with every promotion we run, we now have a way to improve our ROI every time—with extremely minimal extra work.

About 5-minutes-of-extra-work minimal, in fact. Take another look at that page—all it has on it is:

Pressed for time or not, anyone who can use a computer can make a page like this.

So…what made this work?

I think at least three factors combined to produce this success:

The urgency: Standard remarketing ads usually lack urgency—you could stop back in and make a purchase at any point. So for this campaign, we added a double dose of urgency.

Viewers had to act quickly to get on the early-interest list. And then, once we emailed them about the promotion, they had only the Black Friday–Cyber Monday window to get the deal. When customers are worried they might miss out, they’re likely to opt in ASAP.

The value-to-effort ratio: Why would you opt in for something unknown?

Well, you might do it if you knew you wouldn’t find out about it through any other channel (or if you simply knew you were likely to forget to go to a website and check for a special offer three days later). You might do it if it was as simple as clicking one button and filling out one form field. We made it super simple and convenient for people to opt in for something that would potentially be of great interest. So they did.

The chance to move visitors to an owned platform: The really great thing about this tactic is that it has a chance of converting even the people who didn’t ultimately buy. They’re now on our email list, and we know that they’re interested in special offers. It’s possible that we’ll have the right offer for them a month or a year from now.

Could your next remarketing win start with a single landing page?

If you’re running remarketing campaigns that send traffic back to your homepage or a page someone has already visited—well, keep it up if it’s working for you. This isn’t an either/or proposition. It’s a strategy you can add to your playbook alongside all your other conversion marketing tactics.

But to make your remarketing dollars stretch farther, I highly recommend you create a 5-minute pre-promotion landing page of your own, just for your remarketing audiences. Leadpages has dozens of single-fold templates designed to put the focus on a simple opt-in offer—click here to get started if you’re not already using a landing page tool.

Then, go ahead and plan your next promotion knowing you have a pint-size secret weapon to build on your results.

Think this simple remarketing strategy would work for your audience? Tell us in the comments.