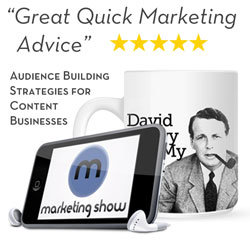 Welcome to the Marketing Show Podcast.

All business have to face challenges if they’re going to survive.

The most successful business owners step up and find a way to hustle past paradoxical problems.

On this new podcast episode, Clay and Andy talk about what it really takes to solve “impossible” business or marketing problems.

Leave us a voicemail at (707) 969-7469 with your questions about building a loyal and excited audience.

If your question is selected, Clay and Andy will play it and hook you up with answers on a future episode of the Marketing Show Podcast.

And if you found this podcast valuable, we’d be completely humbled and honored if you’d do two things:

The Marketing Show Podcast is brought to you by our coaching program.

Clay: Do you ever hear people ask questions like, “How do I start a software company if I don’t have a developer?”and “How I can get a developer if I don’t have the funds to start a software company?” or “How do I test my offer without traffic?” and “If I don’t money for traffic, how can I even justify doing everything to create a company?” Right? These questions where there are these seeming paradoxes. Our answer to that question is this, “Welcome to the NFL.”

My name is Clay Collins and I’m joined today by our head coach Andy Fossett. Andy, thank you so much for being here.

Clay: So, the other day I was listening to someone named Dave McClure, he’s a venture capitalist and someone in the audience asked a question about finding a technical co-founder and the essence of it was, I am new, I’ve never started a business before, I’ve never raised any venture capital. How can I get a co-founder a technical co-founder someone who can turn my idea — my brilliant idea — I’m sure it was brilliant, into some software? How can I do that without funds or experience because if we don’t do that then we can’t raise any venture capital and we can’t get any customers?

And his answer to that question was simply, “Welcome to the NFL” and the nature of that was sort of just man up or woman up. There are these seemingly insurmountable problems these paradoxes that we face every single day in business that there really is no clear answer to other than a whole lot of hustle. Have you found that sometimes, Andy that the situations in business that come up that even now even after they’ve happened you — there’s no clear explanation of how and why they worked other than you just worked your tail end off?

Andy: Yeah, absolutely. I can probably point to several things if I really think about it that has happened in our business just like that. Probably the biggest thing is about a couple of months ago, our overall traffic just pretty much doubled for our main website. Just doubled out of nowhere and it’s, you know, we looked at the stats and stuff and we can see where that traffic, you know, technically comes from where it’s referred from and none of those sources are new, so you know what caused it to jump? And the answer is really that we basically just hustled. We went to the same sources we have been going to, but we just did it like ten times, you know, we wrote some guest posts, but we did more of them. We had the same relationships but we just really worked with those people a lot harder to get — to make sure that we were — we were, you know, helping them out and they were helping us out. And basically, in the space of about six weeks, I guess our traffic just pretty much doubled to our main website because all we did was hustle. And there’s really no other explanation for that, we didn’t do any new tricks, we didn’t — we didn’t launch any new initiatives at all during that time.

Clay: Right. Right. And so, if someone came to you and they said, you know, “Please write an eBook for me about how to double your traffic in six weeks?” It might say something like, “Welcome to the NFL,” or just — or just man up, you know, something like that.

But, you know, I think often what happens is for some people just — just like they’re outliers or times when you hustle and things doubled, there are also times when seemingly out of the blue an offer stops converting or just something that used to work doesn’t work anymore and it’s the same advice there like “Do you know why it happened?” “No.” “Will you possibly never know?” “Why this offer all of a sudden out of the blue stopped converting?” “No.” “Is there any quick tip, any clean answer?” And the answer is no.

And the truth is it’s just one of those, “Welcome to the NFL” situations like sometimes you’re in the middle of the Superbowl and you lose your quarterback and, you know, you use your backup guy and you win anyway. In fact, some pretty amazing quarterbacks have come from situations like that and it’s, you know, as an entrepreneur you need to have plan A ready, but you need have plan B, C, D, E, F, and G lined up as well.

Andy: Totally, totally, totally. Lately, especially with all the Google Algorithm changes, you know, there’s a lot of people complaining, “Oh, Google, they did Penguin that I lost all my traffic.” Well, were you really relying on Google for all your traffic?

Clay: So, I was to say that’s one of those “Welcome to the NFL” moments.

Clay: Where you — if, you know, you’re relying on one traffic source and that’s fine, I mean it’s — I’m not going to fault anyone for that. If you’re doing something and it works, why the heck not scale it you know. But when these situations happened that’s just — it’s going to happen as an entrepreneur. I had a friend who recently lost one of his lead developers like the guy he was developing his main thing and they were a successful company and the other developers in place but there is no one who replaced this guy and I cheered him up.

But honestly the best thing I said that cheered him up was just this whole “Welcome to the NFL” thing. I was like, do you think this didn’t happen to like Twitter, Zynga, like, you know, Face — like every single major company has gone through ridiculous hurdles like this and come out on the other side. I mean Facebook stock just dropped by 50%, but that’s the game they’re playing in and they know it. And that’s the game that I think every single company who wants to play big, you know, needs to be ready for. There’s no guru sitting on a mountain who’s going to be able to in a sentence or two tell you how to do in quotes “it” you know.

And I think another version this whole NFL thing and I don’t know why it’s the National Football League, frankly, I don’t watch very much football, but that’s just sort of the phrase that was said. But another version of this is when people talk about this incredibly complex things and then ask you how to do them as if it’s like a thing, right? Like, “How do I write a New York Times bestseller? How do I do it?” you know and it’s like, uhh… uhm, you know, it’s almost like asking, “How do I win a Superbowl?“ Well, there’s a lot of moving parts there.

Andy: How do I find the woman of my dreams and marry her and have a happy family? You can’t sum that up in ten seconds.

Clay: Do that, Andy.

Andy: [Laughter] I’ll hook you up after this. I’ll give you my advice.

Clay: Okay. Okay. Good. Good. Good. Actually, I’m engaged, so I think I found that, but it certainly was not in an eBook. In fact, I think those things probably would have blown up in my face.

But moving on the thing we want to implant in you is that there are — there are certain situations in business that are seeming paradoxes, right? Situations like you can’t test an offer until you have traffic, but you can’t pay for traffic or/and you don’t have the time to acquire traffic until you have an offer that converts. How do you solve that? “Welcome to the NFL,” right?

You need to, you know, get some traction before you can get venture capital, but you don’t feel like you can get traction before you have venture capital financing. How do you solve that? “Welcome to the NFL.” You know you need an awesome company before you can recruit great people, but you can’t have an awesome culture until these great people are already there or until you’ve built — done something that’s going to attract that and how do you accomplish that? “Welcome to the NFL.”

Folks this is just the game we’re playing. We welcome you to it. In my experience, 95% of people or more simply at the end of the day are not cut out to be entrepreneurs and that’s fine. I mean, that’s fine, that’s just the reality, however. So that’s what we have to say. Andy, thank you so much for your insights. Do you have anything else to add?

Andy: No, just, you know, I hope that people find out sooner rather than later if they’re not cut out for it and if they are challenged that they can step up and, you know, make the winning plays that they need to and show some hustle and show some creativity and get to that next level.

Clay: Just a word of advice. If you find yourself, you know, desperately seeking an answer to a question like, “Oh, should I or should I not use pay per click?” or “Should I or should I not raise venture capital?” “Should I go into info product or should I go into software?” If you find yourself repeatedly sort of asking those kinds of questions and looking for an answer and time after time after time, you’re not able to quickly find an easily identifiable answer like a clear answer and just nothing feels right for you, the answer or sort of the reality in that situation is probably that this is one of those “Welcome to the NFL” situations.

You’re not going to find a clear answer, you’re going to most likely get a lot of insight from talking to amazing people, listening to great interviews, reading great books, and sort of sitting in the midst of anxiety around that issue perhaps sometimes wallowing in it until you emerge at the other end with some greater perspective on yourself, on your goals, on the nature of the marketplace, etc. But sometimes you have to consume a lot of information none of which has any answers any extensively answers directly embedded into it as such, but you will, you know, if you do that long enough nine times out of ten in my experience I have emerged on the other side of that with a whole lot of knowledge and a lot of perspective and some direction in terms of moving forward, but not necessarily an answer and so, just take that to heart.

My name is Clay Collins. This is Andy Fossett, our head coach, a great guy, running an amazing business and of course, I’m — I got my hustle on too. So we’ll talk to you next week. Take care.