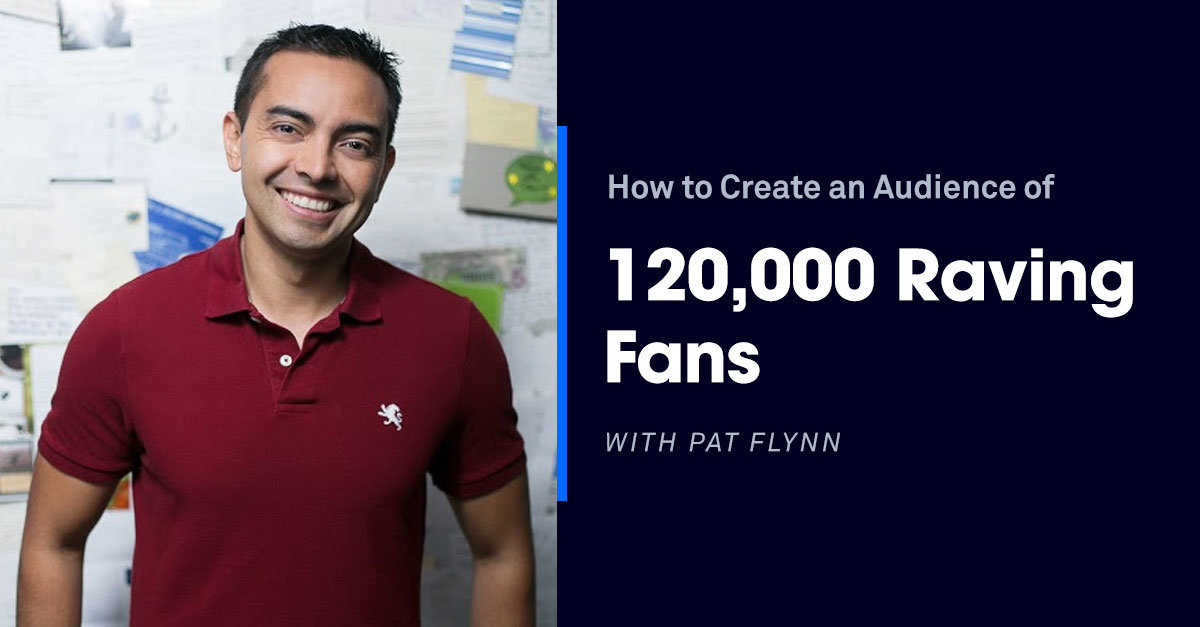 If you speak to Pat Flynn in person, he’ll tell you he’s a “32 year old dude from Southern California who makes a living on the Internet.”

I got to sit down with Pat to discuss his upcoming presentation at CONVERTED, and exactly how he’s managed to attract such an audience.

“I think, there’s obviously a ton of things you could do to build a set of raving fans, and I’ve used a lot of those things to great success, and I’ll talk about those during the presentation. If I were to only have time to share one, it would be the power of the small, quick win.”

“As much as we all want to change the lives of those who are using our content and people in our audience, that’s not always possible. It takes a lot to get someone to make major changes in their life. So really, and I’ve said this before, if you want to change somebody’s life… start by changing their day first.

“As much as we want to go big and think big, sometimes thinking small is a great way to start to build that fan base, because it’s often quite hard to get people to do massive things right away, especially when you meet them for the first time.

“If you get them to do something where they get a result within the first five minutes of an introduction, a quick result from what you’ve shared with them, they’re going to be more inclined to come back for more.

“There’s a book out there by Charles Duhigg called The Power of Habit. In that book, there’s a whole chapter dedicated to the power of the small, quick win. It has to do with this mindset of creating habits. For example, when you give somebody something that they do, and see results from right away, it establishes this thing in our brains of constantly wanting to come back to that person for a reward, and creating a habit out of that.

“Can you give me an example of how you’ve used small quick wins in your business?”

“I have a few specific examples of how I’ve been able to do this and this is something that a lot of the people in the LeadPages® audience could benefit from, especially when it comes to “things like lead magnets and email lists, of course, which are obviously related to what LeadPages® does.

“The first small quick win is in my autoresponder, which is one of the first emails I send out. It should probably it should be the first email in most people’s autoresponder sequences. After people subscribe, you want to send a quick win. You want to share a tip, your most actionable, bet that you can offer that will get them a result.

“For me, one of the very first emails people get from me after they subscribe is hey, here’s a quick tip that you can use if you are struggling to find content to write about for your particular niche, which as I know, based off of a lot of research, is something people have a lot of trouble with in my particular audience.

“The quick win I share is a tip on how to do that really quick. The actual tip is to go to Amazon.com, type in keywords related to your industry, find the top books on it, and look inside the cover of those top books to see what’s in the table of contents, and use that as inspiration for your next blog post or podcast episode.

“That tip is something that takes less than three minutes to do, and I’ve gotten hundreds of emails from people saying things like this: 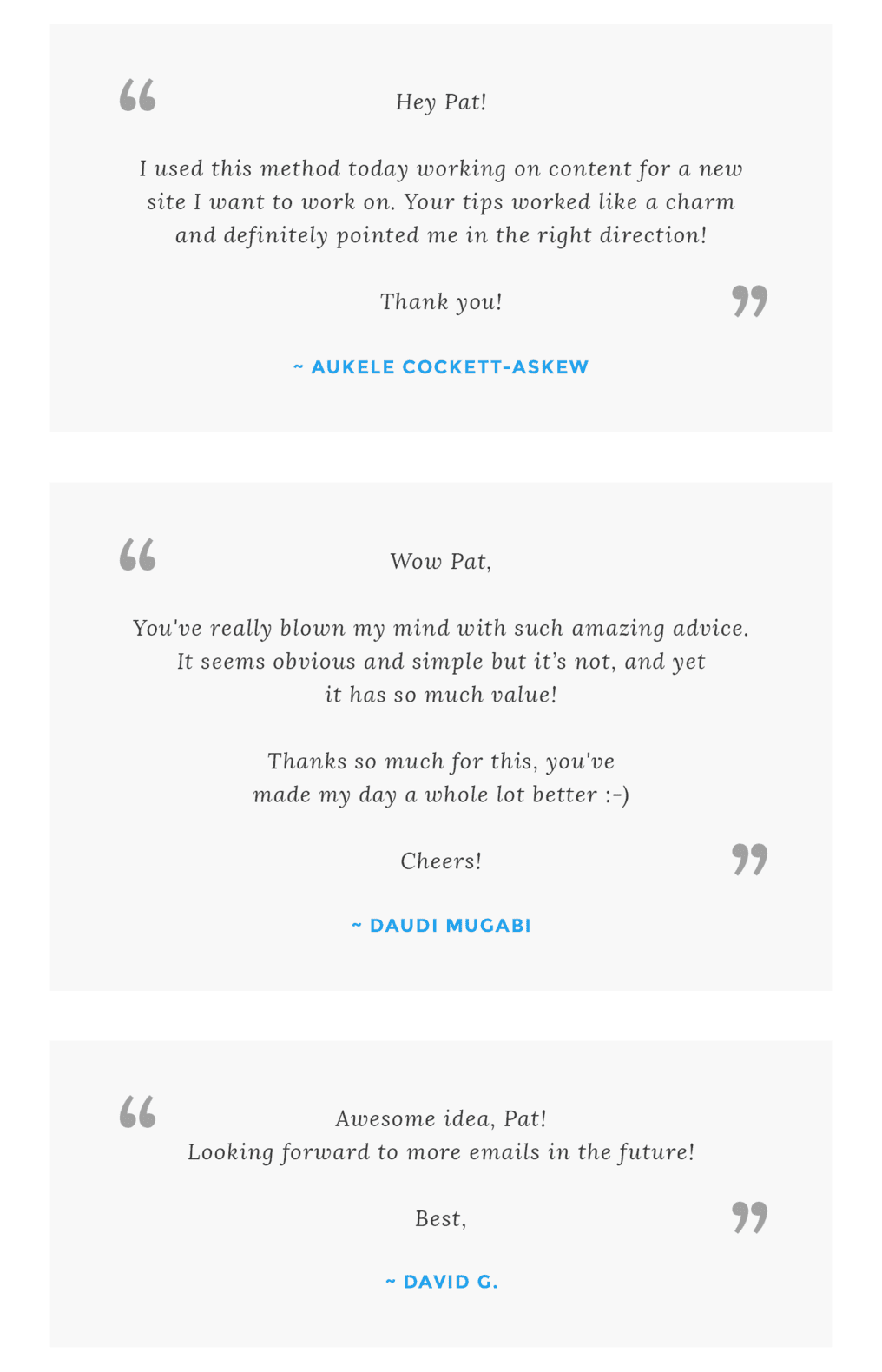 “Again, this is an auto-responder so these emails are coming in every day.”

Yes, I can definitely see how that would be useful. Can you give a couple more examples of quick win tips?

“Another tip that I use is if you have a lead magnet, try and make that lead magnet as useful as possible, again, with the idea of the small, quick win behind it.

“I have a book that I’ve been sharing as a lead magnet for ages now, for five years and over 120,000 people have downloaded it. It’s called E-Books the Smart Way. In that book, I give an outline on how a person could create an e-book, market it, sell it and automate it.

“One of the first tips is to create a mind map, and that’s a quick win for people when they go through that book. Because when you create a mind map, you essentially see your whole book ahead of you, chapters, the whole outline of it. And it becomes much easier to then create the book as opposed to just having this idea of a book, and having it really be this big, grand goal that a lot of people get scared of.

“When you break it down, using a mind map, and I share how to do that in the book, it becomes much easier, and that becomes a quick win that gets people motivated to continue through the book.

“I don’t actually sell anything. Most of the income I generate is from affiliate marketing. When I give my audience these small quick wins, it builds trust between us. I have given them a success, so they trust me as an authority on my subject matter of creating a living from passive income. When I mention my affiliate products on my podcasts or in blog posts, it always seems to be a natural conclusion that I’m providing value to my audience, and a lot of it has started with people getting connected to me through a small quick win that I provided them.”

“There’s a blogger out there, bestselling author now, his name is Ramit Sethi.  His website is IWillTeachYouToBeRich.com.

“I used to read his blog on and off before I got into the online business world. I was in the architecture space and I read his blog because I enjoyed his personal finance tips, but I didn’t read it religiously.

“There was one particular post that I read a long time ago, I don’t remember the headline, but it was essentially a script to use when you called your cable company to save 20% on your cable bill. I was like, “Okay. What do I have to lose?” I tried it. Within 15 minutes, I called my cable company, read the script that Ramit gave me, and I had saved about 25% on my monthly cable bill. And this script was just on his blog, for free.

“That was a quick win and you can be sure that after that, I read his stuff religiously, because I didn’t want to miss out on anything else. Even though he has a lot of information on how to get new job and how to get your dream job, how to make a lot more money down the road. That stuff that needs to take time to happen, but here was a really quick win for me to be able to save money right away on something that he provided. I followed his stuff religiously after that, and I’ve put a lot of his things into practice since then.”

“Have your small quick wins had a similar effect on your readers?”

“I know this technique works because people have told me, ‘It was your book, E-Books The Smart Way that got me started.’

“There was a podcast episode I did with a guy named Kimanzi Constable. It’s Episode 145 on the Smart Passive Income Podcast. In that episode, he mentioned that he downloaded E-Books The Smart Way, and he put my recommendations into practice. That actually led to everything else that has happened in his life in terms of becoming an author. It’s a very actually touching story, if you listen to it, but it all started with that lead magnet.

“Again, going back to LeadPages® and what you can offer potential customers with your free lead magnet, I think that can be a very good example.

“He has since been super supportive. He always thanks me for the start of his journey. He sends me emails now and connects me with people who I wouldn’t have gotten connected with before, based off of where he’s been able to go. It all goes back to that first small quick win that I gave him with that lead magnet, E-Books The Smart Way.

“I think that this quote really sums it up, because I think a lot of people want to make big changes but it always starts with that small thing. In order to get big results, sometimes you have to think small.”

“Can you give our LeadPages® blog audience a small quick win they can try in their own businesses?”

“If I were to recommend a strategy for this, and something very actionable, it would be to think of something that you could offer your audience, something you could share with them, a strategy, a tip, or a tactic that could get them a result within five minutes. Try it out on your Facebook page, for example, just to see what the effects of it are, and you’ll see that it actually does have a lot of pull in your brand.”

Tell Us About Your Small, Quick Win

Leave us a comment about a small quick win you give your audience, or one you’ve received from someone else. And we hope to see you at CONVERTED in October.