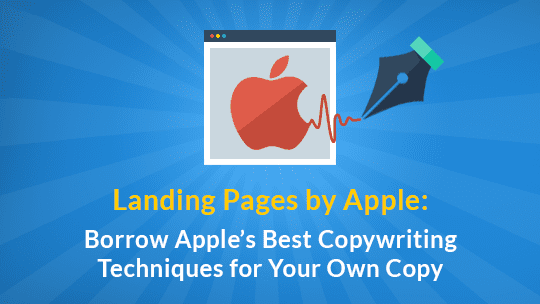 Question: Does it really matter what a company like Apple writes on its landing pages?

Seriously… would people have been less excited for the iOS 8 release if the landing page they built had looked like this?

Okay, so the fact is Apple actually does put effort into writing copy that makes sense.

Because even when you have top-notch products, hundreds of millions of customers, and great design, you can still use copywriting to give yourself an advantage over your competition.

Here’s the deal — this landing page isn’t really designed to get you to buy something right away.

And it’s about placing you, the customer, squarely in the middle of it all.

In this post, I’m going to dissect exactly what copywriting and marketing elements went into building a beautiful landing page that is guaranteed to excite Apple’s loyal legion of customers.

Four Questions to Ask Before You Create Any Landing Page

When designing and writing copy for any landing page, there is one thing you should consider before anything else — context. This means asking questions like:

Answering these questions will force you to put purpose behind every image, every line of copy, and every call-to-action on your landing page.

With these questions in mind, it doesn’t take long to see that Apple created this iOS 8 landing page primarily for existing customers who are fairly fluent in Apple’s language.

Because Apple knows who they’re writing to and why, they’re able to do a few unconventional things with the copy on this landing page.

Notice: You don’t see “iOS 8” anywhere above the fold, or any mention of what “iOS 8” is. In fact, you have to scroll down to see it mentioned in the subhead that reads: “What makes iOS 8 the world’s most advanced mobile operating system.”

There are a couple factors that play into this:

Just like with any Apple release, the most exciting thing about the iOS 8 release is that it’s an Apple release. We, the consumers, know it and so do they.

That gives Apple the leverage to simply trumpet the release itself as opposed to getting super-specific about exactly what iOS 8 is. It’s not about the product — it’s about the customer’s experience of using the product.

Consider the first paragraph after the headline:

At this point, you’re sold on this amazing new experience, now they hit you with the specifics of what it is: “the world’s most advanced mobile operating system.”

This is where they appeal to the droves of gadget lovers who call themselves Apple loyalists (while again trumpeting the “experience”).

The iconic “8” logo. The headline: “Huge for developers. Massive for everyone else.” And, of course, the tastefully understated “Coming This Fall” box.

Exciting, right? But here’s where Apple takes things to the next level — they place every new feature, every new experience, every enhanced function… in the context of your life.

Take the unveiling of the new features in the Photos application:

They don’t just talk at you about the new features, they place them in your everyday context and show you the benefits. And they back it up with visuals that are impossibly colorful and happy:

Apple does this with nearly every new feature on the landing page:

Remember, it’s never about the features — it’s about the benefits to your customers.

The 3 Ingredients That Create Apple’s Tone

The tone of Apple’s copy mirrors their design — clean, minimal, and a few dashes of personality. It’s a perfect complement to the sleek product images featured throughout.

Let’s take a look at one section in particular that serves as a nice microcosm of the entire landing page’s tone:

All the ingredients that make up Apple’s tone can be found in this chunk of copy. Let’s analyze.

Most copywriters will tell you that copywriting is not the time to unleash your inner Shakespeare. You need to be clear, not creative.

As E.B. White wrote in his classic manual for better writing, The Elements of Style, “Use definite, specific, concrete language. Prefer the specific to the general, the definite to the vague, the concrete to the abstract.”

Apple took this advice to heart. Everything is plain and simple. Consider the headline:

“iCloud Drive. Any kind of file. On all your devices.”

As opposed to something like, “iCloud Drive gives you instant access to your files wherever you go.”

If there’s one thing that gets under my skin it’s an unnecessary word. Particularly when the word is “of” or “that” (seriously, “that” can probably be deleted 50% of the time it’s used — you’ll notice I didn’t just write “50% of the time that it’s used”).

In the headline, Apple made my dreams come true and omitted a useless “of” — “On all your devices” vs. “On all of your devices.”

This might not seem like a big deal when looking at just one instance, but it can add up over the course of an entire landing page. Vigilance for unnecessary words keeps copy both concise and clean.

The most impressive factor, however, when considering the copy’s conciseness is how Apple strives to explain complicated and/or extensive features (and how they apply to your life) in four sentences or less.

Seriously — not a single paragraph explaining a feature is longer than four sentences.

In fact, most articles that summed up the iOS 8 release contained more words than this landing page that described almost every new feature.

Ingredient #3: A Dash of Wit

These were my favorite lines in the iCloud Drive paragraph:

It’s clever, not forced, and taps into the conflicting emotions many customers who want to remain constantly connected experience (in a fun way).

It’s Apple’s way of saying, “We’re always here for you…even though we know sometimes that’s a pain in your butt. ;-)”

The Goal of a Landing Page with No Call-to-Action

So what’s Apple’s main goal with this landing page? After all, there’s no buy button or email opt-in. And that’s exactly the point. Because the main goal is to delight their existing customers.

Tell me, do you see any copy remotely resembling any of the following statements?

Apple isn’t trying to get you to buy a new phone.

They’re not trying to get Android users to switch.

After all, details of upcoming releases are like candy to Apple’s faithful. And if they happen to win over some new customers, they’ll take it, but that’s not the goal.

As much as we here at LeadPages love generating new leads, we also recognize the importance of delighting your existing leads while asking for nothing in return.

That’s why, in addition to adding new features for Pro and Enterprise LeadPages customers, we also constantly release new templates and expansive features like LeadBoxes to all existing customers free of charge.

The Elephant in the Room… What’s with That Headline??

It stuck out like a sore thumb at first.

“Huge for developers. Massive for everyone else.”

Why lead with a line about developers… a group of people that can’t make up more than a small fraction of the traffic this landing page will receive?

As the Wall Street Journal said, “The moves reflect Apple’s effort to boost its appeal to thousands of developers who create apps, in the face of intensifying competition from Google Inc.”

The same article went on to quote Frank Gillett, an analyst at Forrester Research, who said, “If the third-party developers aren’t doing jaw-dropping apps, the whole thing breaks down for Apple.”

Further evidence of Apple’s desire to send a strong message to developers: their creation of the new programming language Swift, which Apple says will make writing apps easier and faster.

When you consider these factors, it’s not so surprising after all that Apple would kick off their headline with a message just for developers…

…or is it just for developers?

2. The audience for this landing page is probably more tech-minded than the average person.

The people who are really going to pay attention to the iOS 8 release are those who are already fairly tech-minded. In all likelihood, most will be familiar with the popular viewpoint that Android phones are much more customizable than iPhones.

I mean, honestly — are your parents, who only use their iPhones for Facebook and FaceTime, really that hyped about a new operating system release? Would they even know what “iOS” means?

This strong message for developers comes through loud and clear for Apple’s tech-minded audience — more third-party innovations are coming.

Apple has spent decades carefully constructing a brand that has helped make them one of the most recognizable, loved, and valuable companies in the world.

It would be foolish for me to pretend their copy is the sole reason for their success, and that you can experience the same success if you employ these copywriting techniques.

What you can do, however, is use the same fundamental copywriting techniques that are present in Apple’s iOS 8 landing page to write copy that…

To accomplish those three results, simply follow these three steps:

Remember, don’t try to be Apple. Instead, take the techniques Apple uses, apply them to your brand, and make them your own.

Notice anything else going on in Apple’s iOS 8 landing page? Planning on implementing any of Apple’s strategies in your own landing pages? Let me know in the comments!