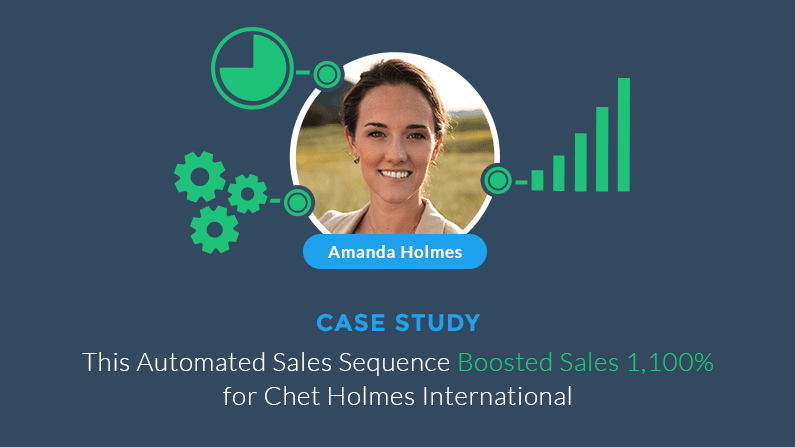 Amanda Holmes inherited an empire. The daughter of legendary sales guru Chet Holmes, she wasn’t necessarily expecting to follow in his footsteps as soon as she did. But when it came time to take over his global sales coaching business, Chet Holmes International, she immediately set clear goals for herself:

She wanted to take a very traditional, phone-based business online.

And she wanted to create an entire marketing automation system, from the ground up.

As recently as 2012, the sales staff of Chet Holmes International generated many of their leads by phone. In fact, the company didn’t use e-commerce at all until 2014.

They’d done remarkably well using decades-old techniques. But Amanda knew that if they wanted to capture the younger demographic and keep growing the business, they’d need to modernize.

To achieve her goals, Amanda and her team rebuilt . . . well, almost everything.

To start, Amanda began working to improve their website, IT structure, operations, and order processing. A couple of years later, Amanda’s general manager convinced her that they should be using Leadpages®.

Once she looked into it, Amanda agreed—and she moved quickly. After just 5 months,  her team haven’t just embraced marketing automation and rebuilt their sales funnel. They’ve increased their sales by 1100%.

“I don’t know why you would create an opt-in page outside of Leadpages®. It’s just all there for you. It’s so simple.” – Amanda Holmes

Once they had their tech infrastructure in place, Amanda and her team launched a campaign to increase membership sales and test the power of going automated. They set up an email service provider with automation capability, but beyond that, the campaign was powered almost entirely by Leadpages® tools. Amanda hoped that this system would help her convert leads into paid members in her sleep.

Usually, in our case studies, we pick out a couple of key performance metrics to show you the effect Leadpages® has had on our customers’ businesses. However, Amanda and her team have seen so much success with their marketing automation strategy and Leadpages®, we had to reveal them all:

“I know that I am not relying on another person to handle all of the things going out. It’s just automated without me.” – Amanda Holmes

How Does This Apply to You and Your Business?

“Yes, [Leadpages®] did increase conversions. Yes, it increased our leads tenfold. But, ultimately for me, it gives me peace of mind.” – Amanda Holmes

Few family businesses are as massive as the one Amanda Holmes took on. But she’s far from alone in needing to bring an established company into the digital world. In getting Chet Holmes International online and automated, she made several smart decisions that businesses of any size would be wise to follow as they adopt new marketing technology:

If you’re interested in trying some of Amanda’s strategies in your own business, we’ve got some tools that will make that easier. To get the four templates Amanda used for her multi-step campaign, plus a full-resolution campaign-flow diagram, click below to download them for free.

If you have Leadpages®, you don’t need to download these templates – they’re already available to you inside your Leadpages® account. Just log in and you’ll see how super easy it is to customize these pages in seconds with no technical knowledge or skills, make them mobile responsive, integrate them with your email service provider or CRM, run A/B split tests, and publish them to Facebook, WordPress, or your own server.