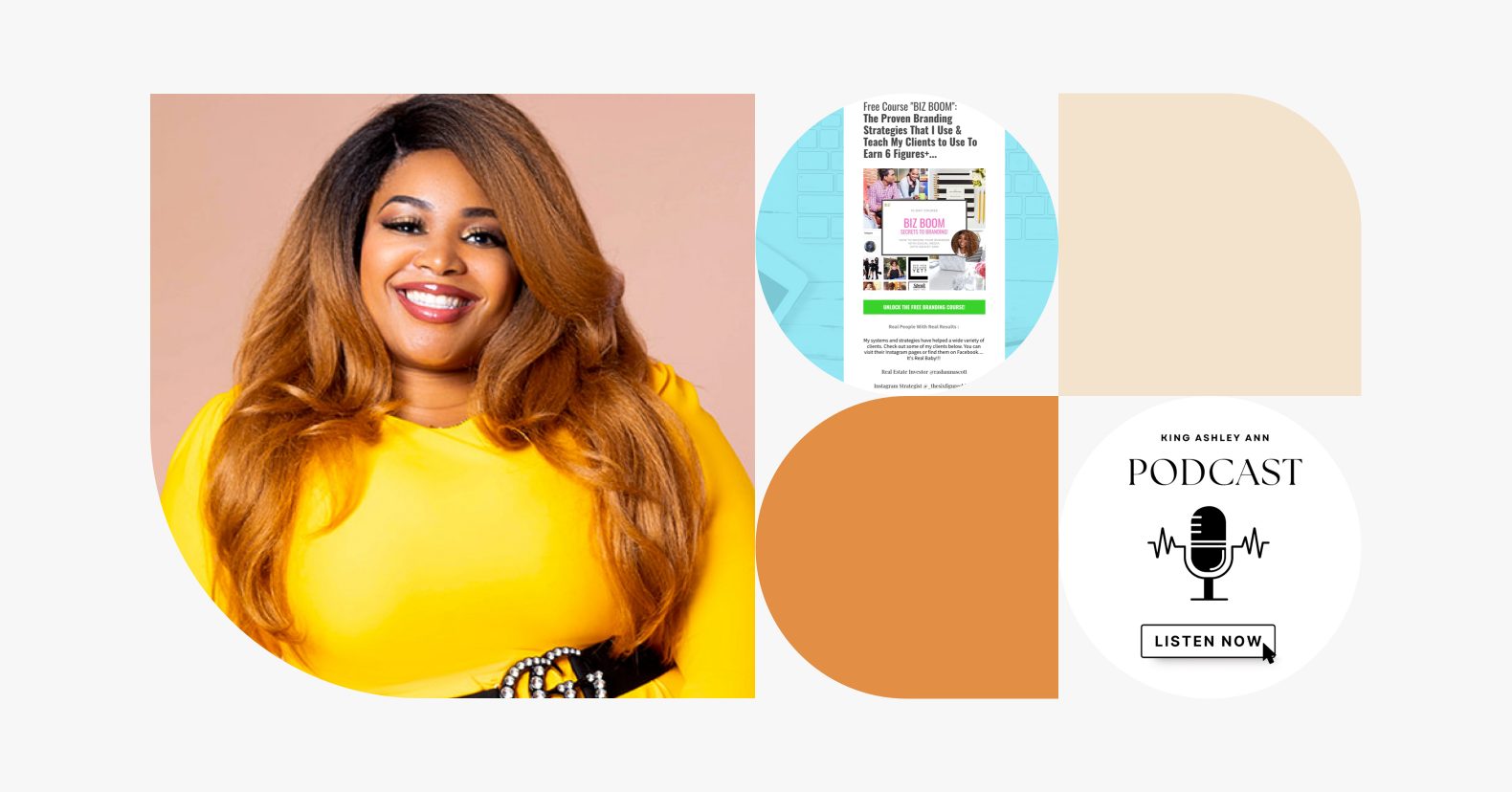 Ashley Ann is a world-renowned social media strategist and business coach who helps entrepreneurs build six, seven, and eight-figure businesses. After gaining her MBA and spending time in the corporate world, Ashley realized she wanted something more. She began her entrepreneurial journey with her own event design business, then later transitioned into social media consulting and coaching.

Today, Ashley operates a multi-million dollar business and works with leading companies around the world. She’s been invited to speak at events across the country (including Ted Talk) and hosts her own annual event for digital entrepreneurs—Accelerate 180.

Early on, Ashley followed the same advice we were all given in order to be successful: go to college and get a job. After earning her MBA she got a corporate job and thought she had made it. Except it wasn’t at all what she imagined.

She was working 50 hours a week and still barely paying her bills. Ashley knew this wasn’t the life she wanted to lead, so she started looking for a new path and eventually founded her own event design company in 2006.

Her business—Ashley Ann’s Events—grew quickly, thanks in large part to her use of social media marketing. After finding success in the event industry Ashley wanted to give back to the community and started holding social media workshops for other event professionals. It was at this point that her career would take an unexpected turn.

Following one of Ashley’s workshops, she was approached by the husband of one of her attendees. He wasn’t in the event industry but was so impressed with her knowledge of social media that he encouraged her to share her strategies with people from other industries as well.

It was also during this time that Ashley started hearing stories of businesses getting scammed by fake social media marketers. These “marketers” would promise to make business owners rich on Facebook, only to never deliver any results and disappear as soon as they got paid.

At this point, her social media coaching was just a passion project she did outside of her event business, but that started to change as more and more people came to her for advice.

One friend in particular started calling her for advice almost daily, even though they were paying a business coach $5,000. It turns out the advice Ashley was giving out for free was better than the information this person was paying thousands of dollars for.

“I was like ‘why do you keep calling and asking me things if you’re paying this business coach $5,000 a month?’ And she said ‘because everything you tell me to do works.’”

When Ashley realized people were getting paid for the work that she was doing for free (and doing better) she decided it was time to start charging for her services.

Once Ashley made her social media coaching services her primary focus the business took off. In addition to her consulting, she also created a wide range of online courses and digital products. Eventually, she started receiving national attention, leading to media coverage and even her own Ted Talk.

After speaking at events across the country Ashley wanted to create her own business conference. She held her first event—Wealth Camp—eight years ago, which started as a small gathering of around 50 people looking to share and gain knowledge about business and online marketing.

She continued holding the event every year and it has since grown to thousands of attendees and dozens of speakers. Now named Accelerate 180, the event educates entrepreneurs about both professional and personal development. It’s become known as one of the country’s top conferences for both established business owners and those who are just starting their entrepreneurial journey.

In the early days of her coaching business, Ashley experimented with a few different landing page solutions. She tried some landing page templates offered by the email marketing tool she was using, but they didn’t convert as well as she would like. She also paid a developer thousands of dollars to create some WordPress pages. These performed a little better, but Ashley knew there was room for improvement.

Working with a developer was also time-consuming and expensive. As Ashley’s coaching business grew so did her products and promotions, which meant she continually needed new landing pages. She wanted a solution that allowed her to create new pages quickly and easily, and wouldn’t cost her a thousand dollars per page.

As someone who stayed up to date with all the latest digital marketing trends, Ashley knew that over time more and more of her traffic would be coming from mobile devices. So, she needed landing pages that were optimized for both tablets and smartphones.

Finally, it was important to her that any tool she used integrated with other digital marketing apps. In order to run her business efficiently, Ashley utilized a wide range of tools, which meant whichever landing page builder she chose would have to play nice with the rest of her tool kit.

Leadpages offers over 250 landing page and website templates that have all been designed to maximize conversions. You can also sort templates in the library based on conversion rate. This makes it easy for Ashley to find templates that fit her brand and generate results.

“Leadpages converts so much better than any other software. I’ve tried custom-built pages, and I’ve tried pages with Kajabi, Wix, WordPress, Mailchimp, ActiveCampaign, Constant Contact, and ConvertKit. There’s still not a page that converts better than Leadpages.”

Leadpages’ Drag & Drop Builder makes building new pages quick and easy. All Ashley has to do is select her template, edit her text and images, drag and drop new elements into place, and hit the publish button. Using Leadpages, she can publish new landing pages in a matter of minutes.

“I love how fast you can put together a page. I can be driving home from work, come up with an idea, sit in front of my computer, and in under 20 minutes have the page up and running.”

All of Leadpages’ templates are optimized for mobile devices. So, whether someone is visiting Ashley’s pages on a desktop, tablet, or smartphone she knows they’ll have a good experience. This means she doesn’t have to create multiple versions of her pages. She can also use the device-specific display settings to adjust how her pages appear on different devices.

Leadpages offers 90 native integrations with all the most popular marketing tools, including ESPs, CRMs, analytics, and more. You can also connect an additional 2,000 tools with Zapier. Ashley uses dozens of tools as part of her business, and they all work seamlessly with her Leadpages landing pages.

Conversion rates as high as 80%

Ashley noticed an immediate difference in her conversion rates when she started using Leadpages. The first landing page she published with Leadpages converted at a 40% rate, and she’s been able to improve that even further. Her highest-performing landing had an impressive conversion rate of 80%.

Both Ashley and her clients have generated millions in sales. In addition to her own businesses, she’s helped hundreds of entrepreneurs achieve over seven figures in sales with the help of Leadpages’ landing page builder.

What’s next for Ashley?

Ashley has a number of goals for her business moving forward. She wants to continue to grow the Accelerate 180 event and hopes to help 500 people grow multi-million dollar businesses before she retires. She also wants to get her marketing curriculum and teachings into universities, as she feels traditional education isn’t quite up to speed when it comes to digital marketing.

Based on her track record so far, we have no doubt Ashley will achieve these goals.

Wondering what to read next?

Here’s what we suggest:

→ How Cathy Wagner Used Leadpages to Double Her Email List