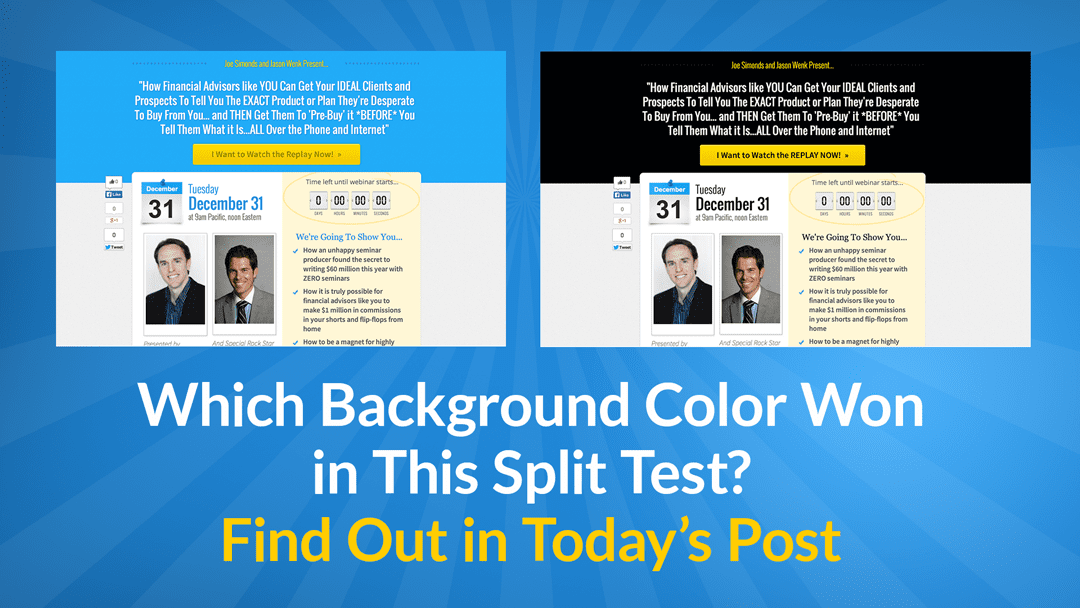 LeadPages user Joe Simonds of Advisor Internet Marketing found that out when he compared two designs of this webinar registration page below.

Joe ran this split test for a very specific reason: After creating this webinar page, he showed the first version of this page to a friend to get a second opinion. His friend liked the page’s copy, picture, and the layout, but told Joe the blue background had to go.

Joe immediately disagreed — blue is one of his favorite colors, you see — but ran the split test anyway to test the advice.

Turns out, it’s a good thing he split tested this. Let’s take a look.

After running the test for just over a month, the Black Header variation was the clear winner.

Overall, Joe’s test touched 1927 visitors and generated 954 conversions for a total conversion rate of just under 50%.

Within the variations, the blue header converted 32% of traffic compared to 52% of the black header. That’s a 63% improvement over the blue with an impressive 99.9%+ certainty after analysis.

Looks like Joe’s friend was right to suggest a color update. Joe can now expect an additional 20 guests per 100 visitors to his registration page — a remarkable improvement for his business.

What Joe Had to Say About this Split Test

“I love that bright blue color … personally, I thought [my friend] was wrong, but I told him that I would split test it to see just how smart he was.”

Though blue header looked better to Joe, it appears that black’s higher contrast was more successful in converting his visitors in the end.

With such clear results in hand, Joe could confidently, albeit reluctantly, shelve his favorite color for a design that produced better results for his audience.

And that’s the beauty of split testing — it can give you actionable information on something that’s otherwise a subjective disagreement between friends.

No word yet on whether Joe’s rethinking his favorite color choice, however. We’ll save that for another blog post.

Running This Split Test on Your Own

LeadPages offers scores of free landing page templates and built-in tools — like the ones used in this split test — that can have your test up and running in minutes.

If you’re new to our system, this three-minute tutorial is a great place to get acquainted.

At the moment, only Pro users of LeadPages have access to our built-in split test tool, but any account has the option of using another split testing tool within our system. Check out the video below to learn more about upgrading your account.

I’d like to say thanks again to Joe of Advisor Internet Marketing for sharing the results of his test. Also, thanks to you for joining me for another split test analysis.

Tell me: Have you ever run a split test like this that did the exact opposite of what you expected? Share your story in the comments below. I look forward to hearing from you.