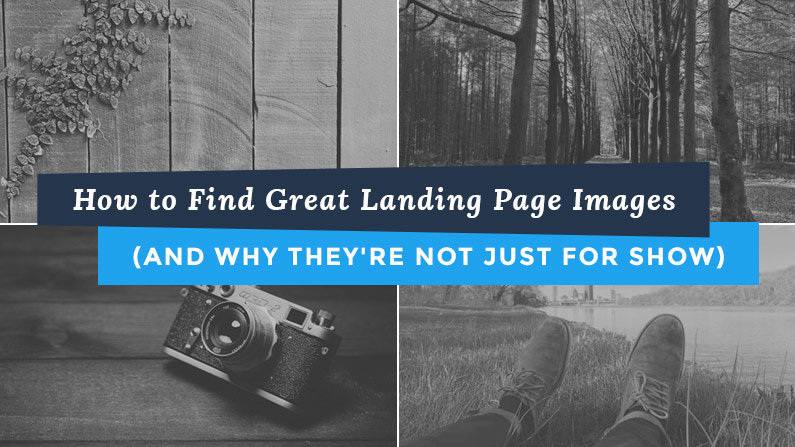 The great, the mediocre, and the ugly.

Most people can tell when an ugly landing page image is staring them in the face. It’s depressing: 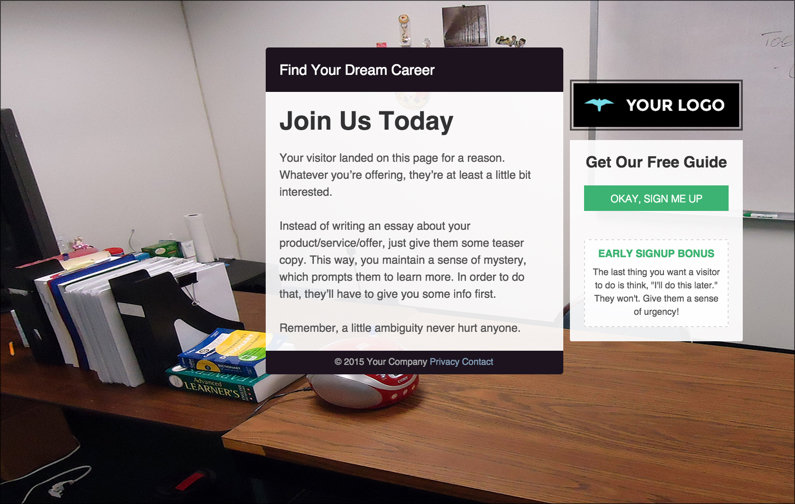 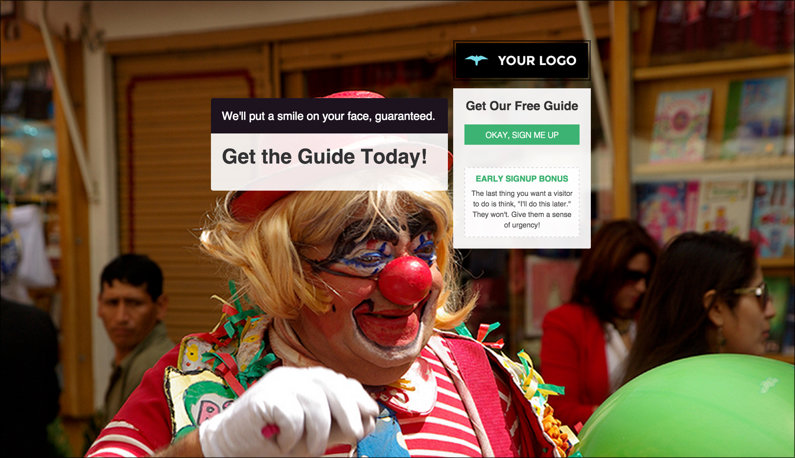 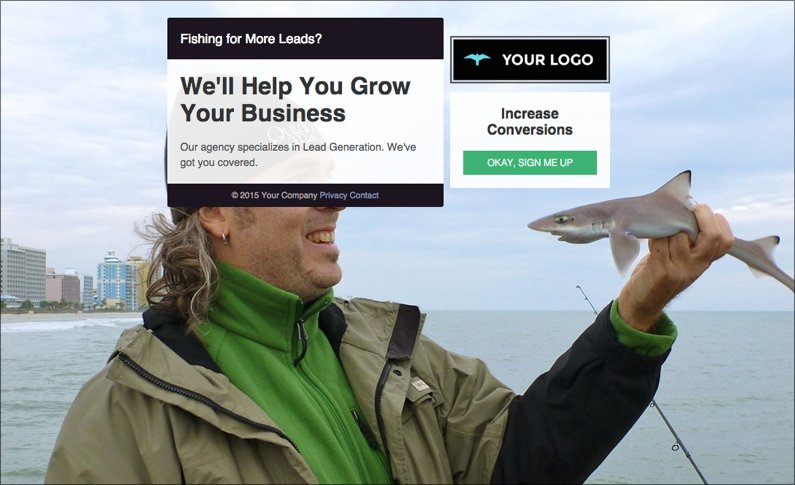 “Ugly” landing page images may or may not be ugly on strictly aesthetic grounds, but either way, they cause you to recoil from the page instead of reading on.

But once you’ve weeded out your ugly image options, how do you tell what separates a mediocre, not-gonna-scare-anyone image from a truly great image?

That’s a little harder—but very important. Because great landing page images do much more than fill space attractively. They can have a major impact on your conversion rate—as much as 900%, in some split tests we’ve seen.

Today, I’m going to give you a few pointers for identifying the best landing page images for your business, based on real-life results and what we know about how design impacts consumer psychology.

Even the most striking, beautifully composed photo in the world can hurt your landing page if it’s not aligned with that page’s core message.

We just saw one example of this phenomenon in a recent A/B test from one Leadpages member.

One version of the page sported a rather plain, wallpaper-like background.

The other boasted a lovely image of a woman’s sandaled feet propped on the windowsill of a pink convertible against a mountain vista.

The problem? The page wasn’t really about kicking back and having the kind of carefree experience suggested by the photo. Its purpose was to promote a workbook designed to help set and accomplish a goal within a one-month deadline—appealing to highly driven entrepreneurs who may have found the photo’s sandaled toes at best a distraction, and at worst out of sync with the image they desired for themselves.

The results: conversions for this version of the page lagged behind the other by about 25%.

This is by no means an isolated phenomenon. For another example, check out a similar A/B test we featured between a tropical-vacation photo and an image of two professionals poring over reports—on a page about business-intelligence software.

Even though it may be assumed that most people would rather be on the tropical island than hunched over the conference table, the buttoned-up version of the page won by 465%.

Your imagery can support your content directly or stealthily. In a post published this spring, marketing analyst Nick Kolenda drew together a few interesting psychological connections between images and content that sells, including:

Most people want to avoid commonly used images on their pages simply so they appear more original, but research shows another very good reason not to be a copycat: if your image wasn’t chosen with your message in mind, it’s likely putting a dent in your conversion rate.

I asked our in-house graphic designer Kayla Sawtelle what she looks for when she’s choosing images for her landing page designs. Number one on her list: a sense of “direction and perspective.” Here’s a simple example of a perspective-heavy image:

Images like this one “are simple yet very striking, as they take the eyes on a journey almost into the photograph itself,” says Kayla. “I think images with direction work especially well for basic squeeze pages where they can direct the eyes in the direction of the call-to-action button.”

Even better: when the element guiding the eye is a human face. Studies agree that when someone’s looking somewhere, our own eyes tend to follow. Changing a photo so that the person featured is looking at the call to action has been shown to significantly impact conversion rates.

You can use this technique in many different contexts. A smiling person gazing at your “Buy Now” button may be effective, or you can take a subtler route. Kayla designed this example below, in which a woman gazes wistfully at a message about cosmetic dental work—perhaps considering how her own life might be improved by dentistry. 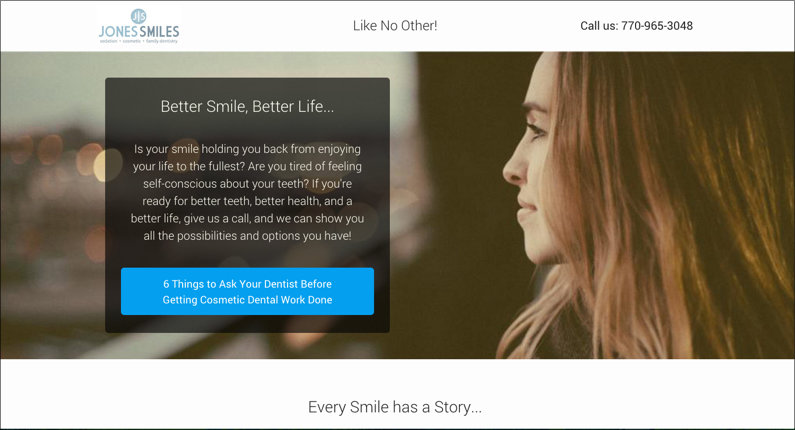 This rule ties together trends we’ve noticed across a spectrum of industries and Leadpages users. It appears that pages tend to get the best results when they use images that feel approachable and welcoming to visitors.

That’s not to say there’s nothing to be gained from the shock value of an unusual or unlikely image. But if you go this route, you should be sure your odd image supports your message seamlessly.

How can you find inviting images? Look for the following three traits:

1. Realism: It can be tempting to get artsy with your landing-page images. On some level, it seems intuitive that applying an odd filter or choosing an unusual angle would be a good way to stand out from the pack. However, we’ve noticed that even a very simple photo, if it’s high-quality and well composed, will often outperform an image sporting lots of special effects.

2. Context: Another fun-in-theory kind of landing-page image is the extreme closeup—say, an ant’s-eye view of a wine glass or a bigger-than-life section of a person’s face. But when we look at the data, photos like this rarely do as well as photos that include some context: not just the wine glass but the hand holding it and the sunny patio behind it.

Why would this be? It could be that the extra work of decoding an unfamiliar perspective distracts visitors from taking action. Or it could be that it’s easier to imagine yourself into a scene that feels more “human-size”—you complete the rest of the picture with your own experiences and are then more likely to take action. Which brings us to . . .

3. Relatability: We’ve seen a lot of A/B tests based on another kind of photo: the headshot. Quite consistently, “lifestyle” shots that include things like non-studio spaces, family members, and even imperfect lighting show an edge over formal headshots.

Even when the subject’s not you, you’ll want to paint a picture that prospective clients and customers can feel comfortable in. Unless you’re using eye contact or sightline positioning deliberately, keep the focus on people’s hands or the work they’re doing. This softer approach makes it less likely that any one photo subject will leap out at visitors and more likely that they’ll feel welcomed by the overall scene.

I hope this at least looks great on mobile, I think every time I pull up a site with majorly pixelated images on my desktop monitor.

On the flip side, it’s annoying to squint at a too-detailed image on my smartphone trying to figure out what on earth that intricate postage stamp is trying to convey.

If you use Leadpages, it’s not too difficult to avoid these missteps: every template is mobile responsive, so your pages will look and function as nicely on a conference-room mega screen as they do on your phone.

Still, you should take care of the size and content of the images you upload. For backgrounds, choose images at least 1440 pixels wide to avoid any distortion at larger screen sizes. (For custom Facebook tab backgrounds, we recommend you upload a narrower version measuring 810 pixels wide.)

Also, consider that the bottom right corner of your image may disappear on smaller screens since background images are aligned to the top left. Make sure your image still makes sense if part of this area is hidden.

Finally, recognize that there is a limit to the power of responsive design. If tiny details are crucial to your landing-page image, consider adding a magnified inset of those details so that mobile users can still access them.

If you’re in e-commerce, of course, you want to wow visitors with fantastic images of your product. But in most other contexts, you actually don’t want your background image or header image to soak up all the attention. You want people to click the right button before their attention wanders.

Some images won’t appear in spaces where it would make sense to draw strong visual lines to a call to action. Use these spaces to support your brand and your product while adding a sense of pace and spaciousness to the page. Kayla pointed out a couple of her favorites that fit the bill:

“Sometimes you’re just in need for a good solid image that doesn’t distract from the message you’re trying to get across,” Kayla says. “I like these images for that reason. They are gorgeous images, yet they are very minimal. They have visual interest, but they can also float to the background and provide a subtle look and feel to the page.”

How do you find great landing page images? What principles do you use that we didn’t cover? Tell us in the comments!