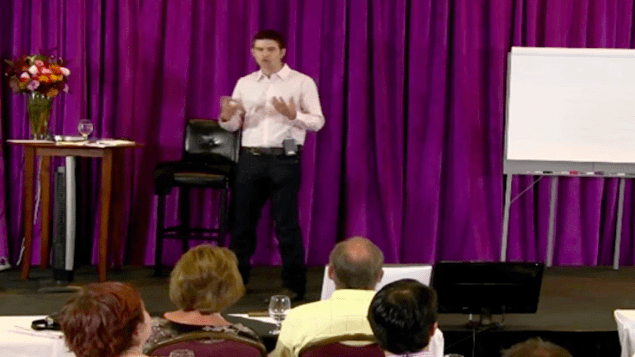 Hello everyone, and welcome to this episode of The Marketing Show. My name is Clay Collins, and if you are a regular viewer, you’ll probably notice that I’m not doing this in a live action studio like I usually do The Marketing Show, right? I’m not in front of the white board drawing things, and that’s because I started creating this presentation last week when I was in California speaking at an event. There’s a picture of me on a stage, and I had an insight that I wanted to share with you.

But before I get into that insight, which is hugely important, and this is one of the most important episodes of The Marketing Show, but before I get into that insight, I just want to talk a little bit about some of the people that I met when I was speaking at the event. When I speak on stages, and you know, share my content, share my message to the world, I often meet some really interesting and great and fantastic people who I would like to recommend to you.

So one of the guys I met was this guy, Robert Evans. You can check him out at TheMessengerNetwork.com. Robert Evans has been behind the success of so many authors and speakers and people who have a message to get out into the world, but primarily authors, primarily people who publish books, and primarily spiritual authors, but he’s doing fantastic work. He’s creating a huge movement, and he’s becoming a really good friend, and he’s a great guy, and he’s also the guy who put on the event that I spoke at. So he’s a really great guy.

Another guy who was on stage with me at that event is this guy, Bo Eason. And Bo has created what the New York Times called the Best Play of the Decade. So he’s a playwright and he has been performing on Broadway for I believe – don’t quote me on this – but I believe the last 12 years, he has a play called Runt of the Litter, and it’s actually about his own history as a professional football player. How many football players do you know who later become award-winning acclaimed playwrights and actors? Not many, but he’s an absolutely amazing person, one of the best speakers I’ve ever heard speak, and just an amazing all-around guy with a lot of great things to share.

Another person I met was this guy, Kyle Cease. Kyle Cease has his own comedy central one-hour special. I believe it came out in 2009. It was voted the best comedy central special of 2009. The guy is amazing. He’s funny, but unlike most comics who are really negative, he has an incredibly inspirational message, and Kyle is out there speaking at colleges and changing the world, an absolutely fantastic guy. So I wanted to introduce you to those guys because they’re pretty incredible.

So I’m going to talk today about the need for absolute alignment in your marketing and really why you need to stop fooling yourself, okay. So this is kind of part 3 in my rant against monetization, but I’m also going to talk about what you can do about it. This is incredibly important. So please, please, please, if you absorb no other content about marketing this week or this month, please absorb this message. This is highly controversial, but I think by the time you’re done with this you’re going to be agreeing with me. If not, leave a comment.

And I’m here to tell you that that is absolutely false. This does not work. It is so rare that I have seen this work, and the instances of this working where you have something and you convert it to cash or you monetize your mission, or you monetize somehow, this works so infrequently it’s ridiculous, okay.

Wal-Mart – And I’m not a fan of Wal-Mart, but Wal-Mart would never say that they monetize their stores because their stores were created as businesses from day 1. So what works is creating something from the ground up to generate income and then making income from it, not taking something that was never created to make income, right, and then converting that somehow to cash, but the point here is that there’s no monetization or conversion happening with this food cart whereas when you take something like a garage sale for example and convert it then you’ve got something jerry-rigged.

So here’s what I mean. On the left, you have a garage sale. Now a garage sale is a version of monetization. Someone did not deliberately go out and acquire everything that’s at that garage sale so that it could be resold. People did not deliberately produce all the items that are at that garage sale to create money. A garage sale is an afterthought. A garage sale is saying we have all this stuff – and in a lot of cases it’s junk – we have all this junk, how can we turn this into money? And that’s what a garage sale is. It represents monetization, taking just some stuff that’s lying around and saying, “How do we convert this into cash?” Whereas a real business like the Apple store was engineered from day 1 to create an income, right? Apple never said, “How do I monetize the iPad? How do I take the iPad and make money?” They created the iPad from day 1 to be something that was for sale.

So an analogy from monetization is a garage sale. It’s awkward. It’s not in a traditional storefront. It isn’t really good at creating income whereas a real business, right, let’s say, Apple or Apple Storefront, is created from the ground up to create income. But let me drive this point home a little bit further. The reality is that instead of monetizing your current assets to convert them “into money,” you need to create something that’s designed from the ground up to generate income, i.e, a real business.

Monetizing is awkward and backwards because it’s taking something that was never created to generate income and just jerry-rigging it to squeeze some cash out. So what we end up monetizing, so often, are things that were never intended to create money in the first place, and the result is kind of awkward and unnatural and amateur, right? We see this all the time. Amateurs occasionally write mediocre e-books that anyone else could have written to squeeze a little money out of their website. They say, “I have all this traffic. How do I monetize it?” But they didn’t generate that traffic in the first place to feed into a business that would create an income so they end up just kind of like throwing up some ads or writing some junkie e-book to try and squeeze a little money out of it, and that never quite works out very well and it’s awkward.

So let’s talk about professionals versus amateurs. Professionals get up everyday, look at themselves in the mirror, rededicate themselves to their mission all over again, execute like madmen and produce excellence week after week. Actually, they produce excellence week after week regardless because that’s the difference between an amateur and a professional. But amateurs monetize, right? They have garage sales. Professionals build businesses. So to bring this to some kind of a conclusion, I want to say this. Monetization in marketing rarely works and rarely works well because it is a form of conversion thinking, and conversion thinking rarely works well in marketing.

So let me give you just some other examples of conversion thinking. People are all the time trying to take traffic that is looking for one thing and convert into traffic that wants to buy something else. So for example, I had a client that ranked extremely well for the term doghouse in Google, and they assumed that if people were searching for doghouses that that same group of people might also be interested in purchasing dog training products because if you’re searching for a doghouse, you probably own a dog, and you might need dog training products. And so, they threw up an advertisement and a sales letter for dog training products, and they sold almost nothing because they were trying to convert doghouse traffic into dog training traffic. The only way, if you’re really going to do well at selling dog training advice is to get people who were searching for dog training, but they were trying to do this conversion, and this conversion almost never works. So it’s very difficult to convert that, and conversion thinking almost never works.

I also see people trying to do things like take a piece of their product and give it away as a bribe in order to get people to buy their overall product, and that’s another example of conversion marketing because they’re trying to take something that was intended to teach and convert it into something that will sell, right? That free piece of their product was intended to teach and they’re trying to give it away in order to generate a sale. And again, giving away a piece of your product in order to sell that product almost never works because you need to give away a free bribe, right, in order to get people to opt in that was generated from the ground up to create desire, not to teach, if you know what I mean.

So sort of the take-home lesson here is that you should create products and businesses that are created from the ground up to create income so that you don’t have to monetize, and monetization is something that’s done as an afterthought where you jerry-rig a website that was not intended to create money, to create money, and it’s awkward.

So that’s the end. I look forward to speaking with you on the next Marketing Show where we’re going to talk about how to create profitable ads by avoiding conversion thinking. My name is Clay Collins, and thank you so much for watching The Marketing Show.