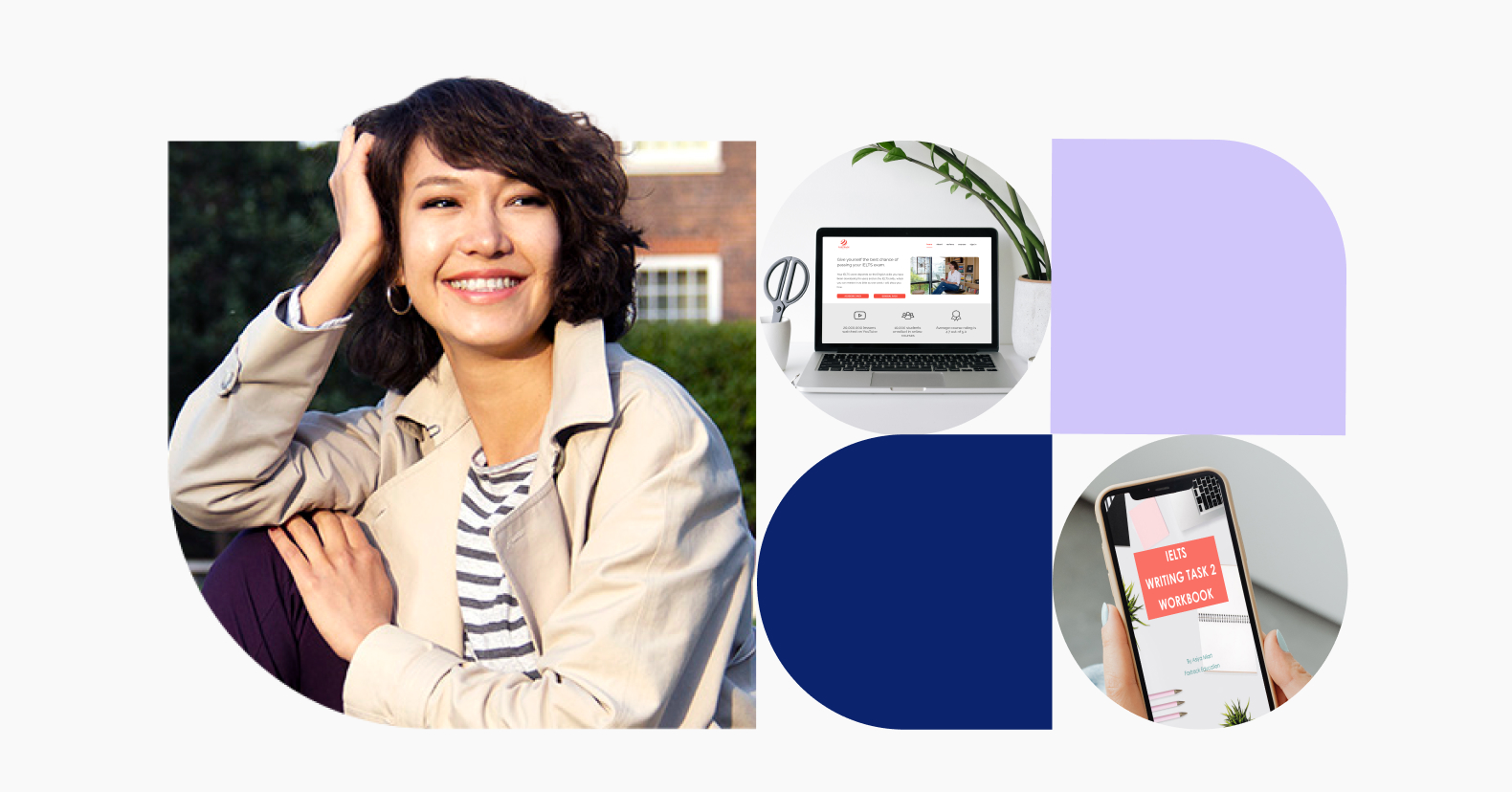 Asiya Miart is the founder of FasTrack IELTS, an English language exam preparation website that helps people prepare for the IELTS exam in as little as one week.

Originally from Kazakhstan, Asiya took the exam herself when she moved to the UK. After working in the banking industry for a few years, she decided to do something she was actually passionate about. So, she quit her job to focus on helping others learn English and pass the IELTS exam.

Today, FasTrack IELTS is one of the top resources for those looking to pass the IELTS exam. In addition to the downloadable content on her website, Asiya also teaches students through her YouTube channel, which has grown to over one million subscribers.

Asiya moved to London to study for her Master’s degree. The move was originally meant to be temporary, but she liked it so much that she decided to stay and it eventually became her home.

After completing her degree, Asiya worked in banking. While she liked her job, she felt like she was just a cog in the corporate machine. She had a lot of initiative and plenty of ideas, but her supervisors only wanted her to do her job—nothing more.

Just as she was starting to have doubts about her career, Asiya’s friend came to her with the idea for an education consulting business, focusing on helping people prepare for the International English Language Testing System (IELTS) exam. As someone who had to learn English as a second language, and take the IELTS exam in order to study in the UK, Asiya was excited about the idea of helping others grow their English skills and pass the test.

As she was toying with the idea of starting this new business, she was tasked with a new role at her company. Not only was this not a role she was excited about, but it would also require months of additional training. Instead of continuing down a path she wasn’t interested in, Asiya took a chance and quit her job to become an entrepreneur.

Like any new business owner, Asiya needed to start gathering leads that she could turn into clients. Her first idea was to gather leads from universities, fairs, and exhibitions, but that proved to be ineffective. She also tried online ads, which worked but were very expensive.

Asiya knew she needed to try a new approach, so she decided to start a YouTube channel. The results were minimal at first, but she saw potential in the platform and stuck with it. She continued creating content on a regular basis, and her channel began to grow. After one year on YouTube, she was completely booked up with clients, and both her business and channel were thriving.

At this point, Asiya had so many clients that she couldn’t work with all of them. She realized she had reached her limit with one-on-one consultations and if she wanted to keep growing her business she would need to find a more scalable model.

So, Asiya changed course and started developing online courses and downloadable PDFs that students could use to study on their own. Not only did this allow her to reach more people, but it automated her business and meant she could generate revenue 24/7.

As Asiya’s business grew, so did her website traffic. Early on she used WordPress to create her website and landing pages, and while this solution wasn’t perfect it worked well enough. But as more and more people started visiting her pages the problems with her website were exasperated.

During traffic spikes her site would slow down, which increased her bounce rate and made it difficult to generate conversions. Asiya also ran into problems as she started connecting more apps and widgets to her site. It seemed with every update she made something stopped working and she would have to drop what she was doing to fix it.

As the owner of a growing business, Asiya didn’t have time to constantly work on these technical issues. She needed a website and landing page solution that was reliable, easy to use, and consistently drove conversions.

Beautiful websites with the full conversion power of Leadpages

Experience the only online website builder that lets you easily create a high-converting website with code-free customizations.

On average, pages hosted on Leadpages load 2.4 seconds faster than pages built with other website and landing page builders. So, no matter how much traffic Asiya drove to her pages she never had to worry about her site slowing down. This resulted in a better user experience, and more sales.

Leadpages offers over 90 native integrations and thousands more via Zapier. This allowed Asiya to connect all her favorite marketing tools to her website and landing pages without any issues.

The Drag & Drop Builder simplifies page building—choose a template, drag and drop elements into place, publish, and you’re done. This means Asiya could quickly launch new pages whenever she developed a course or downloadable product.

Driving traffic to a page is great, but if you want to grow your business you need to convert that traffic into leads and customers. All of Leadpages’ templates are designed with conversions in mind, so Asiya could make the most of the traffic she generated from her YouTube content.

Asiya generates a staggering number of leads every month. This is due to the large amounts of traffic she drives to her site from her YouTube channel, and her conversion-optimized landing pages.

With so many new leads every month, it’s no surprise she has such a large email list. The fact she’s able to maintain such a large list also speaks to the value she provides.

Not many creators reach the million subscriber mark, so this is a massive accomplishment for Asiya. It shows that consistently creating quality content will eventually pay off if you stick with it.

Asiya uses Leadpages for all her lead capture forms and product pages. Drag and drop forms, customizable CTA buttons, and a host of other conversion tools make it easy to create high-performing pages.

Asiya also used Leadpages to create her website. The Drag & Drop Website Builder meant she could create a large and engaging site, even though she had no experience with coding or web design.

What’s next for Asiya?

Asiya wants to keep growing FasTrack IELTS, but she has also recently launched a YouTube consulting business. She’s seen how the platform has grown her audience and she wants to help other businesses do the same.

Given her past results, we have no doubt Asiya can make this new business a success.

Wondering what to read next?

Here’s what we suggest:

→ How Laura Smith Turned Her Blog Into a Full-Time Business