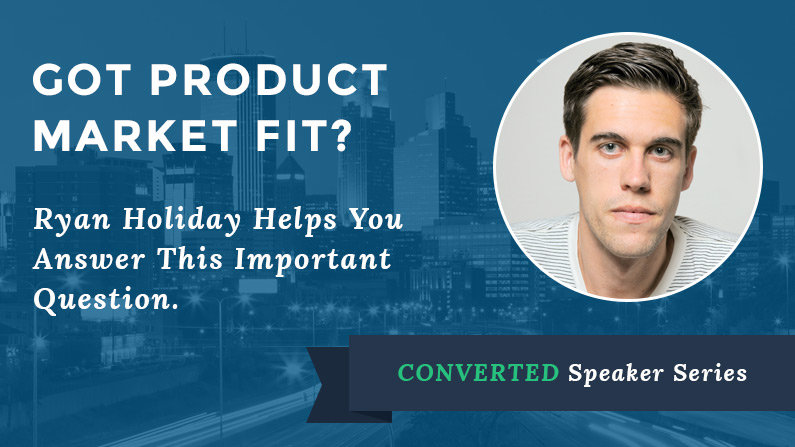 Ryan Holiday has accomplished a lot in a very short time. After dropping out of college at nineteen, he went on to apprentice with Robert Greene, author of The 48 Laws of Power. Since then, he has worked as a media strategist for Greene and for comedic writer Tucker Max and served as the Director of Marketing for American Apparel. He is currently an editor-at-large for The New York Observer.

This is along with writing a blog, strategizing for clients, and booking speaking engagements all over the country. And publishing books. His latest, Growth Hacker Marketing, is a look at how giant brands such as Facebook and Twitter have done away with traditional marketing tools—and what they’ve replaced those tools with.

Although Ryan didn’t coin the phrase “growth hacker” (that was Sean Ellis, founder of Qualaroo and former growth hacker at Dropbox and Eventbrite), he has certainly done his part to popularize the word, both in his writing and in his actions. 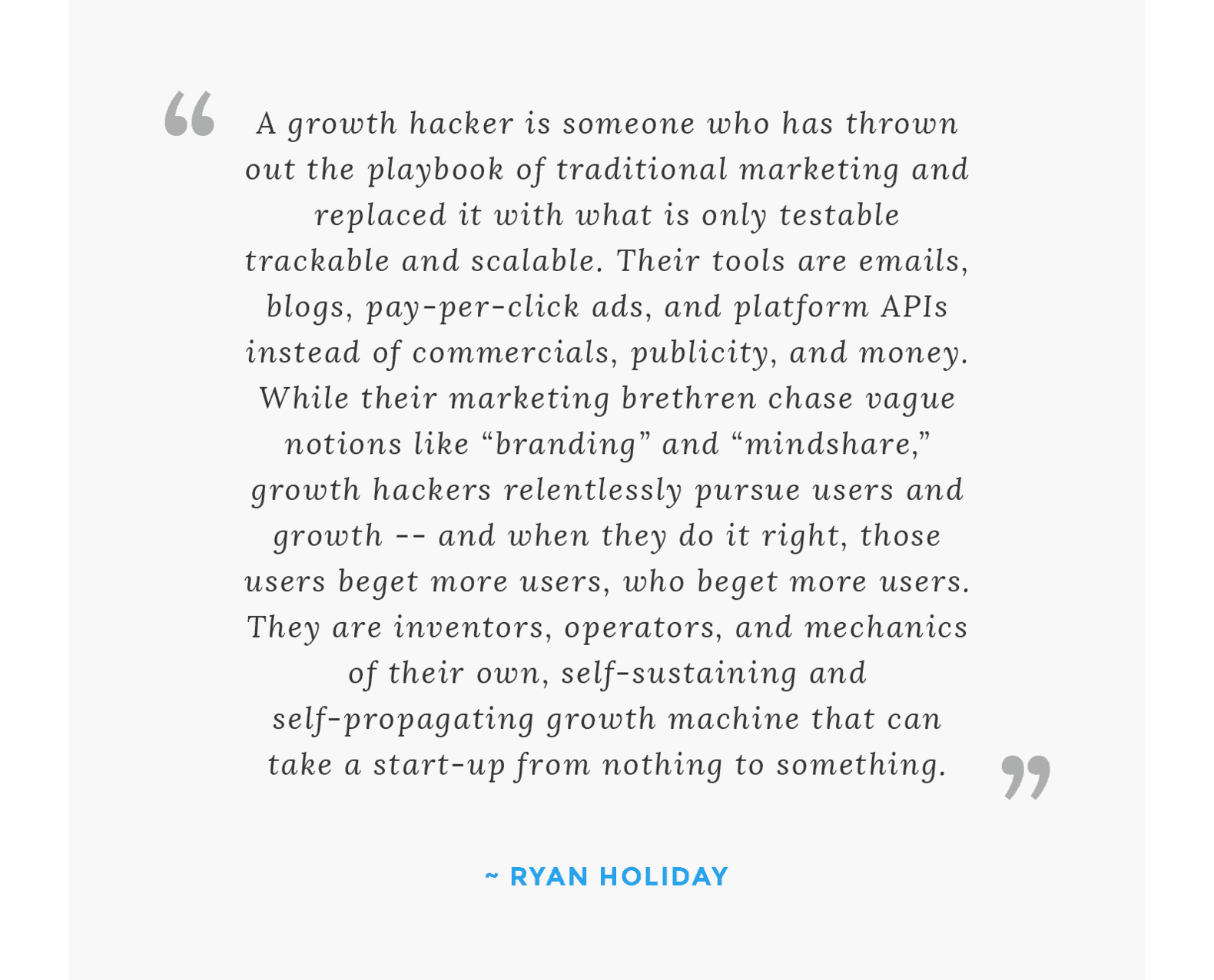 Growth hacking can take a number of forms, but it starts as an innovative idea that helps a company grow, fast. Ryan gives numerous examples of companies that have seen tremendous growth because of growth hacking in his book, including Hotmail, Evernote, Instagram, and Airbnb.

Ryan breaks growth hacking out into four steps—all of which he’ll cover during his presentation at CONVERTED in October. Recently, I got the chance to sit down with him and dive deep into the first step, which is . . .

One of the first, most important things any growth hacker must determine before moving forward is whether a project has good product market fit.

Ryan summed up the core concept with a quote from Paul Graham:

And it’s important to note that what you intended your product to be isn’t always what your customers want. Sometimes you have to adjust your product to make it a better fit for your market.

“We tend to think that new products are made in sort of flashes of inspiration or genius,” Ryan observed. “In reality it’s an iterative process, it’s a collaborative process.”

Ryan uses the example of Instagram. It started out as a location-based social media company called Burbn— until the founders realized that most of its users only used the photos and filters feature within their app.

Instead of trying to figure out how to make users interact with the rest of the app, the founders had a meeting and decided to focus on the part of the app their users wanted. They retooled their app, renamed themselves Instagram and had 100,000 users within a week of relaunching their product. Eighteen months later, they sold their company to Facebook for $1 billion.

One of the most important things in finding a good product market fit is to listen to your customers.

In Growth Hacker Marketing, Ryan talks about Amazon’s approach of “working backward from the customer.” Amazon’s employees start their potential projects by writing an internal press release, addressed to their customers and written as though the project were complete. The press release explains to these hypothetical customers how the new offering solves their problems in an exciting or compelling way.

If the press release doesn’t convince anyone, the potential project is tweaked over and over until its resulting press release is compelling enough to work. Once this process is successful,  the company starts creating the product.

Ryan pointed out another upside to starting with the customer. “When you have this thing that solves a very real problem, that is exactly what people want, marketing it is considerably easier.”

So how can you listen to your customers? Ryan put forth some great ideas:

This is also referred to as creating a minimum viable product, or MVP.

I asked Ryan what he considered a good gauge for positive feedback on a minimum viable product. What he gave me was more along the lines of when you know you need to try again instead of when you’ve succeeded.

“It’s not like, ‘Hey if it gets 50 retweets, then I’m going to do it.’ Or ‘Hey, if a 100 people buy it, Groupon is in effect.’ There’s no hard and fast rule. If you put your idea out there and you get nothing, that is the cleanest, clearest, most important feedback you can get. It means people don’t care. It means you’ve got to go back to the drawing board, again and again, until they do.”

For those of you who have followed LeadPages cofounder and CEO Clay Collins for a while, you know that this process is very similar to his Presell Formula or Interactive Offer course, which was one of his flagship products prior to founding LeadPages. It’s also how LeadPages was built.

Ryan believes the most important part of the creative process is gathering customer feedback. By listening to your audience, you can learn everything you need to know to make your project a success. If you don’t listen, your project can end up an utter failure. 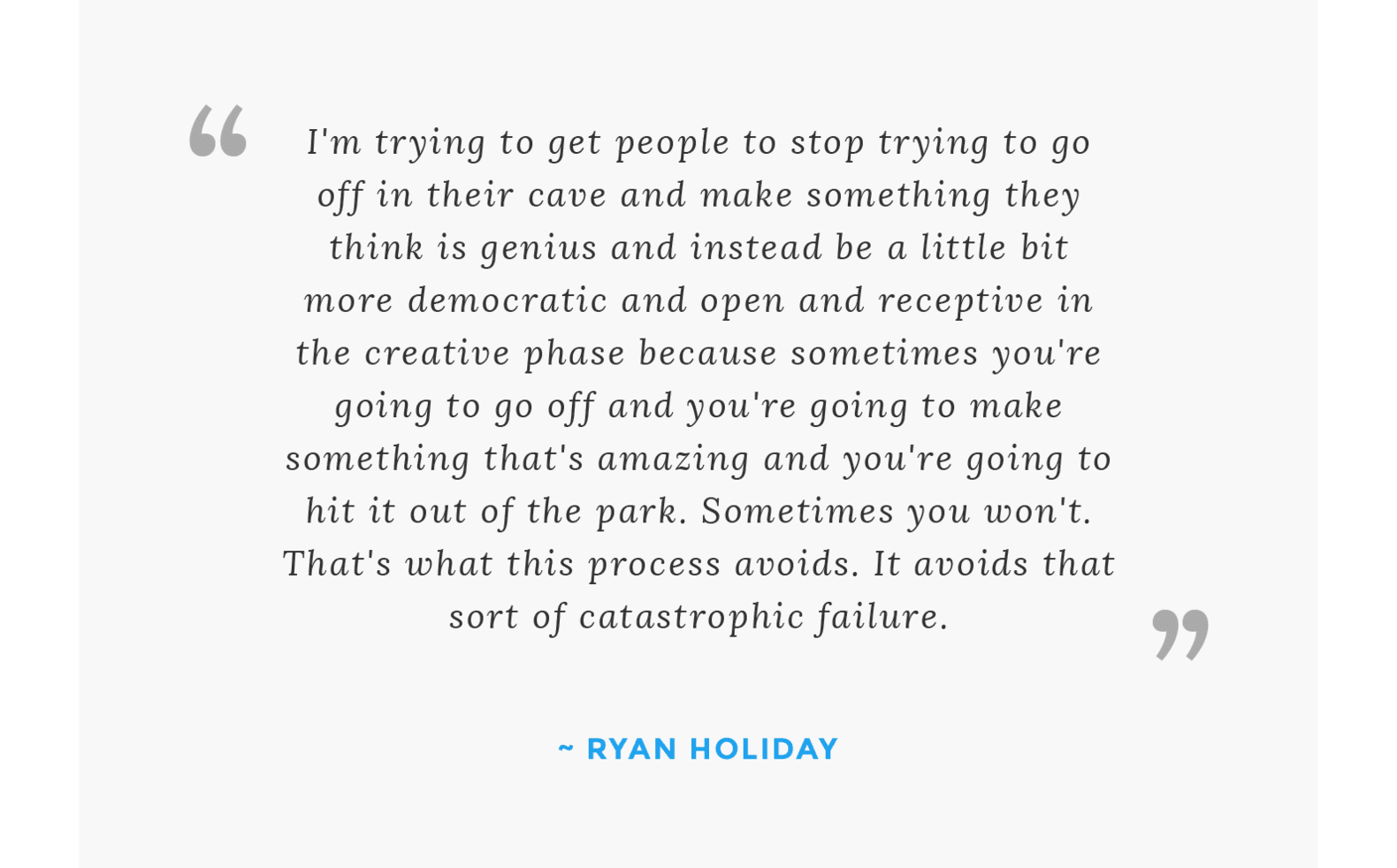 I asked Ryan for an example of how he’d used this process himself. It turned out he had one ready at hand, in paperback format—before it was a book, Growth Hacker Marketing was an article for Fast Company and then a 10,000-word e-book.

In practice, he said, the concept of an MVP is “about figuring out the smallest version of this idea that you could proceed with, determining how are people going to respond to that idea, and moving forward from there. In my case the feedback was my editor at Penguin saying, ‘Hey, I think there’s a book here.’ Then we widened that discussion to involve my agent. Then I did a series of interviews with people. Over time I started to get a sense of, ‘Okay, this is where the book is. This is how long it is.’”

Ryan borrowed some other best practices from the tech-startup world in planning his book. “I made the risk relatively small,” he said. “I decided this project was not going to take a year or 2 years of my life to produce. It’s going to take a month or a month and a half. Then we’re going to release it and we’re going to see what the market says. Does it sell or does it not sell? It sold, and shortly thereafter we proceeded with the expanded version of the book which came out about a year later.”

There is an element of serendipity in all this, Ryan acknowledged: “I think if you’re a curious person, if you’re an active person, you’re going to take risks. You’re going to  accidentally create some of these minimum viable products and put them out there. It’s when you get a response that surprises you, that makes you say, ‘Hmm. Maybe there’s something here? What would it cost to flesh this out a little bit more?’ That’s when you should act, and see how far you can go.”

What Will Your Next Growth Hack Be?

Do you have a great idea that you’re about to implement? Or have you put something into action that has made your business take off? Tell us about it in the comments.